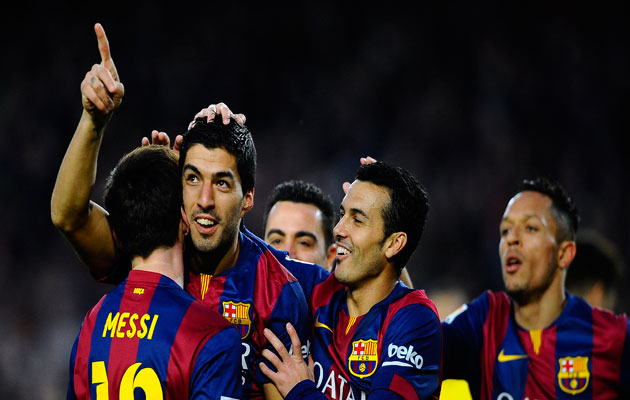 Leo Messi’s 300th league game for Barcelona saw him score his 278th, 268th and 269th league goals. Another weekend, another hat-trick, and another record fell. With his three goals against Levante on Sunday, Messi has now scored 23 hat-tricks in the league, level with the all-time record holder Cristiano Ronaldo; he has also scored 31 hat-tricks in all, again equalling the best total ever, alongside Telmo Zarra.

And so the battle goes on. Messi is catching up. Ronaldo began the season in sparkling form but has scored just three in 2015. Messi and Barcelona began the form with doubts hanging over them, but now they’re in incredible form. At one point, Ronaldo had a 12-goal lead over Messi for the Pichichi award as Spain’s top scorer. Now, the difference is just two. In total, Messi has scored 26 goals in a month. No one in Europe has scored as many in 2015. No one in Europe has provided as many assists, either.

Barcelona began the new year with a defeat against Real Sociedad that provoked a crisis so grave as to even force the president into calling elections and to deny having handed coach Luis Enrique an ultimatum. The collapse looked complete; instead, the response has been incredible. Since then, Barcelona have won 11 games in a row, including three victories against champions Atletico Madrid, who they did not beat in six meetings last year. They have also scored goal after goal: five, three, four, four, one, six, three, three, five, three, and five.

4) Real feel the fall-out from Atletico thrashing
The fall-out from the derby defeat against Atletico continues to hurt Real Madrid. They beat Deportivo 2-0 and remain at the top of the table but an unconvincing performance was not enough to win over the fans.

There were whistles for Carlo Ancelotti, Cristiano Ronaldo and, particularly, Iker Casillas. “If they whistle, they’re right,” Casillas said, wrongly.

5) Setback for Atletico
Atletico beat Real Madrid to close the gap to just four points at the top last week. A week later, defeat at Celta put them seven points off again, six behind Barcelona. With 15 games to go, they need Barcelona and Real to slip up at least three times while maintaining a perfect record themselves.

It’s not all over, but almost. Simeone started with Mandzukic, Torres and Griezmann in the team but he admitted he had got it “wrong”, “wasting 45 minutes.” Without Koke or Arda, there’s something missing.