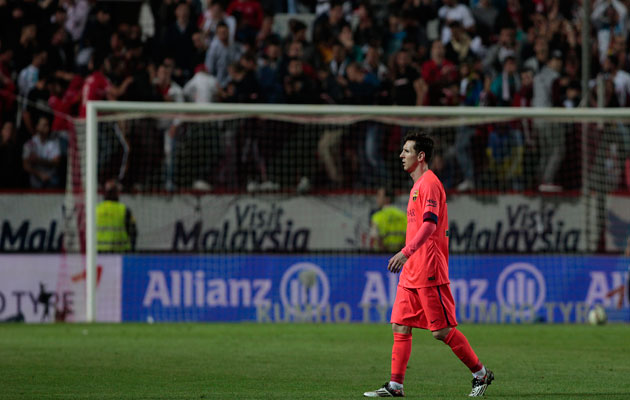 They all came to the Sánchez Pizjuán to face Sevilla, but not one of them won. Unai Emery’s side have gone over a year without being defeated at home. You have to back thirty-two games to their last defeat, against city rivals Real Betis in the Europa League (a defeat they turned round in the second leg, going on to win the trophy), and back a further month to the last time they lost in the league. That was against Barcelona in February 2014; now they have added them to the list of teams who came but were unable to win.

Sevilla came from 2-0 down to draw 2-2 with Barcelona — a draw that even their president Pepe Castro accidentally called a “win” post game. His Freudian slip was a small one; for Barcelona, the slip was a big one. The gap at the top of the table is down to two points, meaning that they must now match Real Madrid’s results until the end of the season if they are to win the title.

This was always likely to be tough, probably the toughest game Barcelona have between now and the end of the season, except the away game at the Calderón on the penultimate weekend. That morning, Sport and Mundo Deportivo had both led on this game being “half the league title.” If so, half the title had gone. And it had looked done at 2-0, too. Barcelona were playing their best football of the season.

Luis Enrique replaced Neymar at 2-1, sending on Xavi as he sought to gain control in the game. It did not work: Sevilla got the equaliser in the 84th minute and Neymar got angry, gesturing his anger.

“I don’t know why he made that change,” the club’s vice-president said.

Afterwards, Luis Enrique did not appreciate being asked about it. “I’m interested in the football,” he shot back. “Not this stupid stuff that you lot are more and more interested in.”

Santiago Mina was a centre-back who was known, insofar as he was known at all, for being tough. His son, Santi Mina is an attacker who stood out from a very young age, first getting a call-up to the first team at 17, but who was largely unknown outside Vigo. Until this weekend. For this weekend, he scored four against Rayo Vallecano. Aged 19, he is the youngest player ever to get four goals in a game. Celta won 6-1, despite the fact that it was Rayo who took the lead after 33 seconds. “We were extraordinary for 89 minutes,” said the Celta manager, Berizzo.

Chori Castro scored the goal of the week … and possibly the season. He belted in a beautiful volley in Real Sociedad’s 2-2 draw with Deportivo de La Coruna.

Deportivo were being managed by Víctor Sánchez de Amo, their former player and Michel’s former assistant at Getafe, Sevilla and Olympiakos. He is the thirty-third coach of the season in the first division.