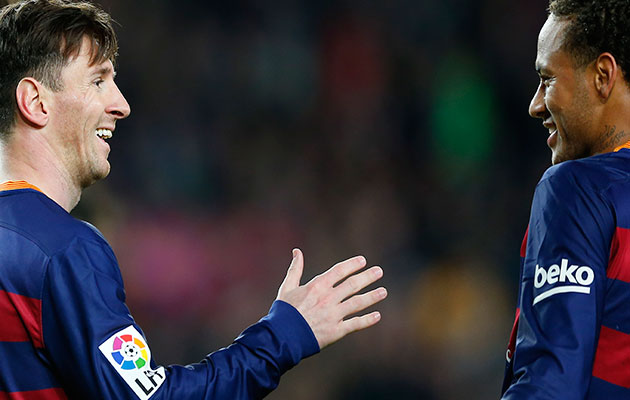 La Liga chose the comedian Leo Harlem to present their gala for the 2014-15 season but he was out-funnied by the awards themselves, which not for the first time were a bit of a laugh. Still, at least people were watching and talking about them, which was what mattered most of all.

One hundred and thirty-four countries followed the gala live, they said, but then they say a lot of things and they’re not always true. Especially when it comes to their reach. Those who did watch it, certainly in Spain, had quite a lot of fun — just perhaps not for the ‘right’ reasons. Most of them did, anyway: there were also the eternally offended who found the whole thing a terrible affront, but then they find pretty much everything a terrible affront. When it’s against them, that is.

The Spanish league have made a huge effort to gain a greater media presence over the last three or four years and the work they have done is impressive indeed. It takes a while, though, to build a tradition and to make people take you seriously, for it to feel real.

The league awards are only three years old and it’s hard to avoid the feeling that they’re still in that phase where they need the players more than the players need the awards, where what matters most is names, and not upsetting anyone. But of course when you try not to upset anyone, you upset people. And so it is that even though they are working hard at promoting Spain’s “other” clubs, the reality is what it is: that familiar big two dominate.

When Atlético Madrid won the league, they didn’t win any of the awards, and when Messi was voted as the best player two years ago, they hastily constructed another award to try to ensure there was something there for Ronaldo too.

And so to this year. Sofiane Feghouli won the award for best African player. And Luis Enrique won best manager.

So far, so good. But then it gets a little odd. And not just because, as the angry media mob in Barcelona were complaining that in a treble they got only five awards while Madrid got three … as if that, in itself, is impossible and a heinous crime.

Claudio Bravo received the award for the league’s best goalkeeper, a moment that was marked with a video in which he appeared … making mistakes.

Sergio Ramos won the best defender award for the third year in a row. Now, Ramos is very good, of course: a world and European champion, the man who rescued the décima for Madrid. But which may be as much because he is the most famous, most likeable and most likely to turn up, as because he was better than, say Gerard Piqué or Nicolás Otamendi last season, which he wasn’t.

James Rodríguez won the best midfielder award, ahead of Antonie Griezmann … who is not a midfielder.

Neymar was the best American player, ahead of Messi … but not the best player, which was Messi.

And while Messi won the best player award, Cristiano Ronaldo won what most joked was the Quick Let’s Think of an Award To Make Sure He Turns Up Award, officially known as the Fans’ Award … which he didn’t turn up to collect.

** When he collected his award, Messi admitted that when it’s time to go his young son Thiago complains. “Are you off to goal again, daddy?”

Well, yes. Messi also shared the award with Neymar and Luis Suarez who, he said, deserves to be on the podium there and for the Balon d’Or. And Neymar said much the same.

** Messi? Suarez? Neymar? Ronaldo? Griezmann? Pah! Five goals in three days, including a left foot, right foot, header hat-trick against Rayo Vallecano, took Athletic Bilbao’s Aritz Aduriz to 38 goals in 2015. It also took him beyond Luis Suarez (on 18) and onto twenty goals in all competitions this season – more than anyone else in the country.

** Nuno Espirito Santo is Valencia manager no more. He appeared after his side’s 1-0 loss to Sevilla and announced to the media that he was resigning.

The decision had been taken that morning, hours before the game began but downstairs at the Sánchez Pizjuán Nuno’s (ex) players admitted that was the first they had heard of it.

The club didn’t officially announce it until late the following day, either. When they did, there was a small difference of opinion. Nuno didn’t resign, they said; he had been sacked.