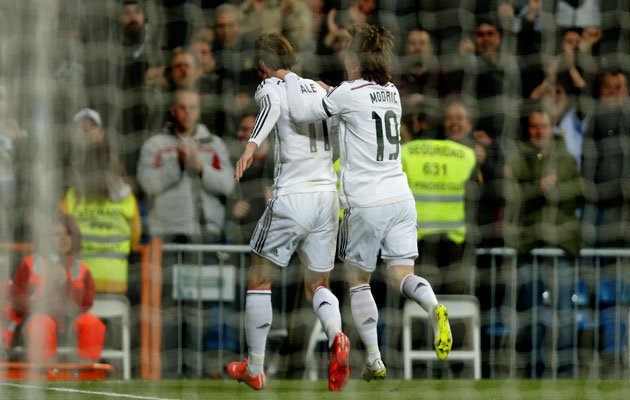 * Nine games and many more whistles later, Gareth Bale scored for Real Madrid. Cristiano Ronaldo’s shot was cleared off the line, Karim Benzema headed down the rebound and Bale was there to guide it into the goal.

There was vindication in his celebration: he set off running and put his hands over his ears, kicking the corner flag. Over in the area, meanwhile, Cristiano Ronaldo was throwing his hands up, annoyed that it hadn’t been him who scored.

Not long after, another Ronaldo shot, another Bale goal. He deflected the ball in to make it 2-0, marking an impressive display.

Bafflingly, when the stadium announcer shouted “Gol de Gareth Bale,” some whistled. As if Bale had somehow done something wrong. At one point there were then even a few whistles for Ronaldo, to which he reacted angrily. It was a frustrating night for Ronaldo, the goal eluding him. For Bale, there was mostly satisfaction and a sense of making his point and at the right time too. After three games without a win, with Luka Modric finally making his first start after suffering a terrible Achilles tendon injury, Madrid beat Levante 2-0. Next Sunday is the clásico against Barcelona.

* Sometimes the stats don’t tell the story. Messi scored two goals as Barcelona beat Eibar 2-0  but that wasn’t what fans will remember. Instead, it was all about a ridiculously good run that left four men in his wake and took him fifty yards up the pitch. The end result was no goal but millions of jaws on the floor.

* Atlético Madrid drew 0-0 at Espanyol, after an Antoine Griezmann goal was disallowed. Someone somewhere jumped for a ball and that was enough for the whistle to go, it seemed. No one knows why but presumably for the same reason that similar goals are disallowed all the time in Spain. Because the referees are cowards. How easy it is to blow for fouls from attacking players; how difficult it is to blow the same fouls from defenders.

* “It’s nice that we have avoided the headlines about going a whole year,” smiled David Moyes. For the first time since last April, Real Sociedad won away from home, thanks to a 1-0 win at Getafe. “That’s three wins in four, we’re getting better,” Moyes said.

* “Here we are with [Malaga’s] Juanmi,” said the touchline reporter at the end of Málaga’s 2-0 win over Córdoba at the weekend, holding out his microphone.

“Well, Juanmi, much better than against Granada, no?”

“This game was much better than the game against Granada [last week]. More control.”

“Er, I play for Córdoba,”  replied the player.