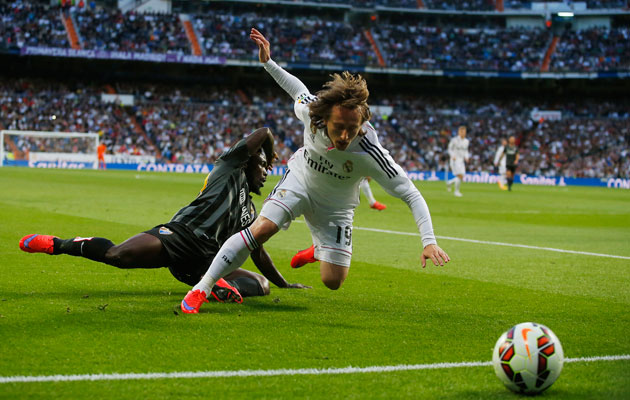 * Luka Modric departed the Santiago Bernabéu late on Saturday night having just been told that he is likely to miss the rest of the season because of a knee ligament sprain.

If Real Madrid make the final of the Champions League, he might just about make it back in time for that game. And that, many Madrid fans think, is a big ‘if’. Why? Because put simply, without Modric Madrid are not as good as side. During his 24 game absence, Madrid lost at Mestalla, San Mamés and the Calderón — twice.

Modric was not the only casualty of Madrid’s 3-1 win over Málaga, either. Gareth Bale will be out for around three weeks. Meanwhile, Karim Benzema appears unlikely to make it for the second leg against Atlético and Marcelo is suspended.

* Barcelona suffered but somehow found a way through against Valencia, winning 2-0 with one goal in the first minute and another in the last.

In the middle, Valencia were superb — particularly in the first half. “Never in my life have I seen a game with so many chances against Barcelona,” said Valencia goalkeeper Diego Alves.

The visitors hit the post and had a penalty saved by Claudio Bravo. “My feelings are strange ones,” Nuno admitted. “I leave here proud but not satisfied. I feel hurt and sad.”

As for Barcelona, Luis Enrique said that they had been strengthened by the win: by the character, the reaction and above all the points. After a week in which they dropped two points to Sevilla, they could not afford to drop any more or Madrid would have gone top.

Instead, the lead remains two points with one game fewer to go. And now it’s Madrid’s turn to play Celta, Sevilla and Valencia in a row.

* Signing of the season? It’s hard to look beyond Antoine Griezmann, who scored two more — the first a wonderful goal — against Deportivo de La Coruna. That’s twenty for the season in the league alone.

If Atlético really have given up on the title, and Simeone says they were never even in it in the first place, it was a great weekend for them: they now have a four point lead over Valencia in third.

* “My shirt is white but my tie is not black,” said José Antonio Romero, the Córdoba manager.

There was no funeral. Not yet, at least.

His side’s 0-0 draw with Villarreal means that they are not down but realistically they probably know they will be before long, sitting bottom, eight points off safety with six games left.

“I won’t let anyone bury us while we’re still alive,” Romero said.