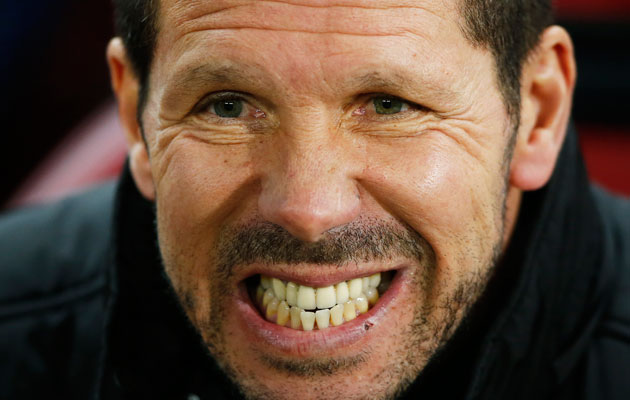 1) Atletico and Sevilla firing blanks
“We’ll go out there with sub-machine guns and two rounds of ammunition,” said Sevilla Unai Emery on the eve of his team’s clash with Atletico Madrid. It turned out, they were firing blanks. A 0-0 draw means that Sevilla remain unbeaten at home in 28 matches, going back a year, and leaves Atletico a single point ahead of Valencia in fourth and seven points behind leaders Real Madrid.

2) Villarreal hold their own in Madrid
Villarreal visited the Estadio Bernabeu in between their Europa League match with Salzburg in Austria and their Copa del Rey semi-final against Barcelona at the Madrigal.

They made seven changes and some were suggesting it was a B team that they were putting out; there were even accusations that they had effectively thrown the match. Instead, they drew 1-1 and, Real Madrid’s assistant manager Paul Clement admitted, they deserved it too.

“It angers me when people question our professionalism; it’s a lack of respect and it’s not fair on the players,” coach Marcelino said.

“We have proven again that we are professionals. We were in the second division not long ago, lots of our players do not even have 100 first division games to their name, some of them are 19, 20. We are very proud of what we have done.”

He became the first Rayo player ever to score four goals in a first division game. Better still, he scored them all in just fourteen minutes.

FIFA have docked three points from the Spanish club because of a dispute over a debt owed to the Danish club Aalborg because of the transfer of Michael Jakobsen in 2010, but while the RFEF is enforcing the ban, the LFP insists that the punishment will not be applied and have told Almeria that they have nothing to fear.

Aalborg have claimed 57,000 euros from Almeria in formation rights, plus interest because of the delay in making the payment. Almeria say that paying that money was the responsibility of Copenhagen, to whom they sold Jakobsen two years later, and that they have the paperwork to show that. Almeria did eventually try to pay the money themselves, with interest, but they were told that the deadline had passed.

The case will now go before the Court of Arbitration in Sport. In the meantime, the RFEF website shows Almeria in 18th and going down. The LFP website shows them in 16th and staying up.

5) Getafe in a mess after Sanchez Flores walkout
Pablo Franco took charge of too games this weekend: he was on the bench for Getafe and for Getafe B having been appointed to replace Quique Sanchez Flores, who walked out in midweek, less than two months after joining the club.

“Quique has left us in a bad way and at a bad time,” complained the Getafe president Angel Torres.

The coach has kept a discreet silence, saying that the decision to depart was “personal”, but he might well say that it is the president that has left them in a bad way and at a bad time.