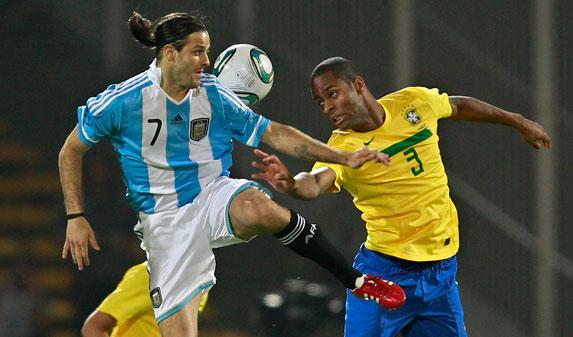 Vasco da Gama coach Ricardo Gomes – who is currently recovering from a stroke – was a fine centre-back in his playing days and even captained his country. So when he says that Vasco defender Anderson Vital da Silva, better known as Dede, has the potential to be even better than he was, it is a comment worth listening to.

The rise of the 6ft 4in central defender demonstrates just how fine the line can be between success and failure. Dede joined Vasco in 2009 after impressing with his home-town club, Volta Redonda, in the Rio state championship, but initially found first-team opportunities hard to come by. Volta Redonda translates as “round trip” and last year, with his contract at Vasco coming to an end, it looked as though he was going to get a return ticket back to his first club, or maybe sold to South Korea. “But there was something I was determined upon,” Dede recalls. “I wasn’t going to leave Vasco by the back door.”

A dearth of centre-backs meant he was given a chance in a Brazilian Cup game against Vitoria and, although Vasco were knocked out, he gave a performance of such authority that he instantly became first choice. Since then his form has seldom been anything less than imperious. Quick, strong and assured, he was the rock of the side that won this year’s Brazilian Cup and is being called the most outstanding central defender the country has produced since Thiago Silva found his form at Fluminense.

It is a comparison Dede enjoys, saying of the Milan defender: “He’s my role model, the best centre-back in the world” – and it may not be long before he lines up alongside his idol in the national side.

Dede was unfortunate not to be taken to this summer’s Copa America, and if that was a mistake by coach Mano Menezes it was one he immediately rectified by including the big defender in his squad for subsequent friendlies against Germany and Ghana.

Thiago Silva’s current partner Lucio is now 33, and Chelsea’s David Luiz has lost ground after a disastrous performance against France earlier this year. So if Dede gets the chance to show what he can do at international level – and takes that opportunity as well as he did the one against Vitoria – then he will be firmly in the frame to start should Lucio fall by the wayside before 2014.

Menezes has promised to look at more domestic-based players, which should also work to Dede’s advantage. A few years ago he would almost certainly have been sold to Europe by now, with Benfica, who have been following his progress, a likely destination.

But Brazil’s boom and Portugal’s economic bust means that he should still be around next year to pick up important experience in the Libertadores Cup.

Whatever happens, Dede will do it all with a smile on his face. “I’m always joking and my team-mates say I’m like a big kid,” he admits. “But on the field I have to impose respect. If I’m joking around with the striker then he’ll take me to the cleaners. On the field I’m totally different.”

Dealing with the pressure of playing at home in 2014 will be no laughing matter. But if Dede can maintain the progress he has made over the past year, Brazil fans will have an added reason to dream about ending the next World Cup with a big grin.