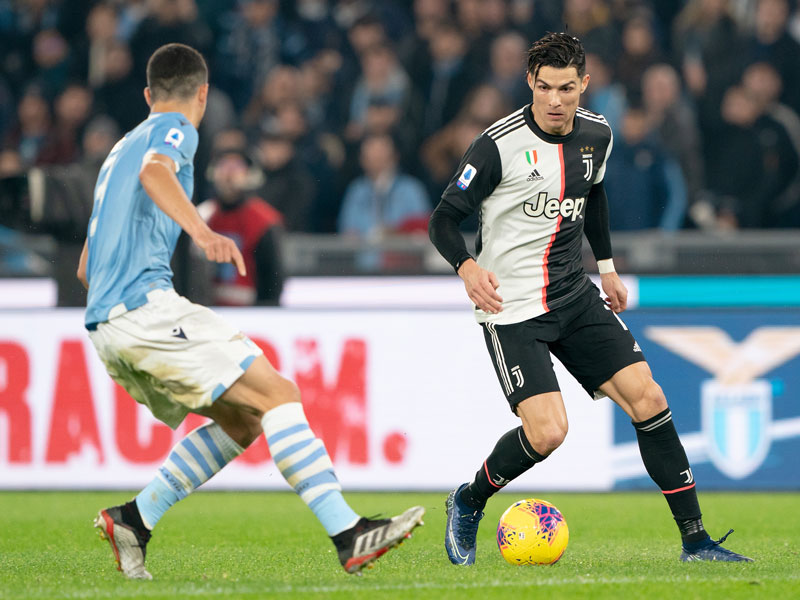 65,000 fans at Rome’s Olimpico stadium enjoyed an electric night last Saturday as Lazio became the first side to defeat champions Juventus this season. As the Lazio team songs rang out at the end of the game and as the Lazio players embraced one another, it was all too obvious that this was a very special moment for the Roman club.

After all, this was the first time in 16 years that Lazio had beaten the Old Lady in Rome. Any defeat for the Juventus juggernaut makes for headlines of the sensational variety whilst the final 3-1 scoreline has an emphatic look about it.

Given that Juventus have picked up just one point in their last two league games and now lie second in Serie A, two points behind Inter Milan, you could even suggest that by their own standards (8 consecutive league titles) they are in a “mini-crisis”. With all due respect, though, we would suggest that “normal service” will shortly be resumed. It is worth remembering that so far this season, between Serie A and the Champions League, Juventus have played 20 games, winning 15, drawing 4 and losing only once, to Lazio last Saturday.

Saturday night’s firecracker of a game, however, certainly leads to a couple of intriguing thoughts. First and foremost, Lazio are right now probably the most in-form team in Serie A. Consistently competitive in recent seasons and regular Europa League qualifiers, Lazio are no pushover.

This latest win, however, suggests that the Roman club might yet take their game up a notch, with a first four finish not out of the question. At the moment they are third in Serie A, five points behind Inter and two behind Juventus.

With experienced players like Francesco Acerbi in defence, Brazilian battler Lucas Leiva in midfield and Serie A’s leading goalscorer Ciro Immobile up front, they have long looked like a seriously useful side. Yet when midfield schemer, Spaniard Luis Alberto, and the inspired Serbian attacking midfielder, Sergej Milinkovic-Savic, are on the top of their game, as they were on Saturday night, then Lazio look like top four finish material.

In the end, however, Saturday night’s game was much closer than the emphatic final scoreline might suggest. For the opening half hour Juventus appeared in control, playing some excellent, quick first touch football of the sort much espoused by their coach Maurizio Sarri.

As we came to halftime, the champions appeared to be full value for their 0-1 lead, a goal scored by CR7 Ronaldo in the 25th minute after a viciously quick passing movement involving Argentine Paulo Dybala, Ronaldo and Uruguyan Rodrigo Bentancur. Then came the first of two fundamental turning points in the game.

Just before half-time, sustained Lazio pressure saw them work the ball to Luis Alberto on the left-side edge of the Juventus penalty area. His perfectly flighted cross, hanging and dipping at the right moment, found the head of Brazilian defender Luis Felipe for a splendid equaliser.

Conceding a goal just before you go in at half-time is never a good business and so it proved for Juventus. From looking as if they were in smooth control of the proceedings, the champions suddenly had to get down and boogey as an inspired Lazio made a battle of it.

Speaking after the game, coach Sarri said that Juve’s first half had seen the best performance of the season from his side. Neutral observers might agree. However, Juve failed to exercise that same smooth control in the second half as the seemingly more resilient Lazio made a scrap of it.

Just when we were thinking that Juventus had weathered the Lazio storm, along came the second all-important turning point. Not for the first time this season, the offstage VAR referee had a major say, too.

Throughout the night, Lazio’s speedy right sided midfielder Manuel Lazzari had proved a thorn in the Juventus defence with his pace causing huge problems for both Frenchman Blaise Matuidi and Brazilian Alex Sandro. As he broke from his own half following a Lazio clearance in the 70th minute, Lazzari appeared to be clean through, only to be pulled down by a last-gasp, last man tackle from Colombian Juan Cuadrado.

Referee Michael Fabbri initially ruled Cuadrado’s blatant body check to be a yellow card offence. On the advice of his VAR colleague, however, Fabbri looked at the TV replay of the incident, changing his mind and ruling it to have been a red card offence that had denied Lazio of a clear goalscoring opportunity. Given that the tackle in question had come well outside the penalty area, the decision clearly did not much impress the Juventus camp.

With the momentum of the game having swung hugely to Lazio, it came as no surprise four minutes later when Milinkovic-Savic scored the game’s decisive goal. An absolutely unstoppable force two seasons ago when he appeared on the threshold of a transfer to Real Madrid, Milinkovic’s form last season was disappointingly poor, in part because of injury.

Just when we were wondering when the real Milinkovic would stand up again, he delivered what 1982 World Cup winner Marco Tardelli later called the goal of the season. Luis Alberto hit another of his pinpoint accurate through balls, Milinkovic controlled it on the run with his right foot and scored with his left in almost the next stride.   2-1 for Lazio.

At that point, Juventus gave it their all but it was Lazio who not only missed a penalty but who also scored an injury time third goal through Ecuadorean Felipe Caicedo. Lazio might have beaten a ten man Juventus but it was hard not to feel that on the night, they had deserved the three points.

For Lazio, it will be hard to maintain this level with their relatively limited squad resources. For Juventus, there will be other days, especially when the side has more thoroughly absorbed the football philosophy of coach Sarri.

With Inter drawing 0-0 to a suddenly more impressive AS Roma in Milan, the rest of us are just delighted with the idea that this might even be a three team title race come the New Year.  Roll on 2020.