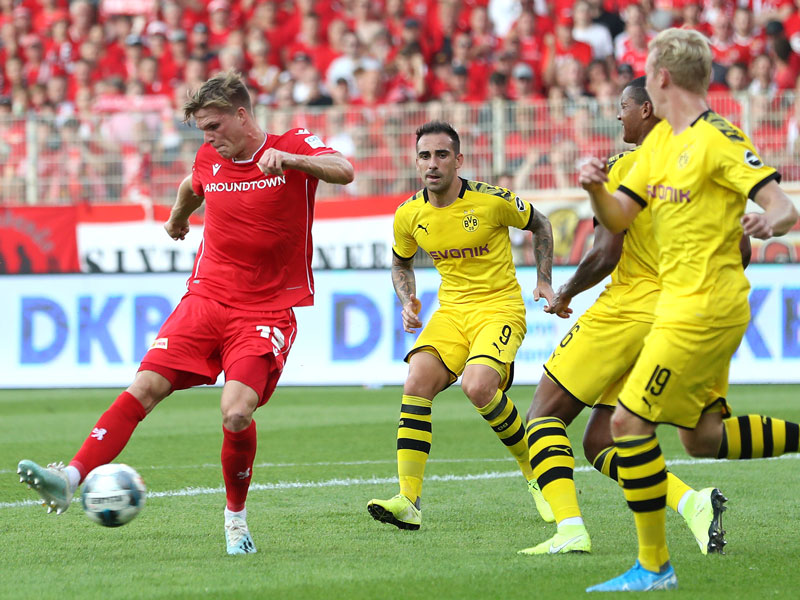 Sharpshooting Union Berlin winger Marius Bulter forever will cherish the day he helped bring mighty Dortmund to their knees, his two fine goals putting the newly-promoted Reds on course for a 3-1 giant-killing for the ages.

Union’s astonishing achievement, their first-ever victory in the Bundesliga, had its roots in all manner of factors. Dortmund’s defensive sluggishness; the remarkable lung-busting efforts and tactical discipline of the Berliner ensemble; the raucous the wall of sound generated by the hometown Alte Forsterei crowd and Man of the Match display from Bulter, a 26-year-old top-flight rookie.

His was a tour de force exhibition in every sense. Gutsy, athletic, direct, full of running and so remarkably cool when taking his two chances, preferring technique and timing to power.

His second goal was a particularly noteworthy effort, latching onto a convenient rebound and hitting the back of the net with a crisply-struck low left-footed drive from the edge of the box. “World-class,” exclaimed former Germany and Bayern skipper Lothar Matthaus in his role as pundit on Sky Deutschland.

“This has to be the best game of my career up to now,” declared Bulter in a post-match interview. “Scoring my first Bundesliga goal. And doing it against Dortmund on a Saturday night. It’s a great feeling. There was a little bit of luck involved too. Both of my first two shots on goal went in.”

According to the usual ‘rules’ of the game, Bulter should not have been anywhere near the Bundesliga. As a youngster, he was not considered good enough to be inducted into a pro academy – instead learning his chops in the youth set-up of western lower league outfit Preußen Munster – and just 15 months ago was turning out for SV Rodinghausen in the third tier of the domestic pyramid.

He spent last term playing in the second division for famous old DDR club Magdeburg, where he generally made a good impression but could not prevent the Blue-and-Whites finishing up in the relegation zone. Union made a bid for him this summer, only for Magdeburg to initially resist. After talks about a permanent transfer talks fell through, a deal for a single-season loan finally would be struck. Union are believed to have an option to buy.

“It’s the dream of every football to play in the Bundesliga,” says Bulter. “It’s something very special. At this level, the quality is so much higher than I’ve ever known. As a new player, I have to give 110 per cent and must not pause for breath.”

1. Self-induced sorrow,
Hertha Berlin were their own worst enemy in the 3-0 defeat at Schalke, conceding not one but two own-goals courtesy of unfortunate interventions from centre-backs Niklas Stark and Karim Rekik. ” In our first three games of the season, we’ve let in eight goals, ” said a visibly concerned Hertha coach Ante Covic. ” We know what steps we have to take to put it right. ”

2. Backchat in Bavaria.
In a move which may not prove especially advisable, Bayern director of sport Hasan Salihamidzic has hit out at star striker Robert Lewandowski for daring to criticise what he considered the club’s lack of big-name signings this summer. ” I have just told him that he doesn’t have to worry about doing my job or those of Karl-Heinz Rummenigge (chairman) or Uli Hoeness (soon-to-be ex-president). And absolutely not openly. It’s nothing to do with him. ” Lewandowski recently signed a new contract with Bayern, which should keep him on board until 2023.