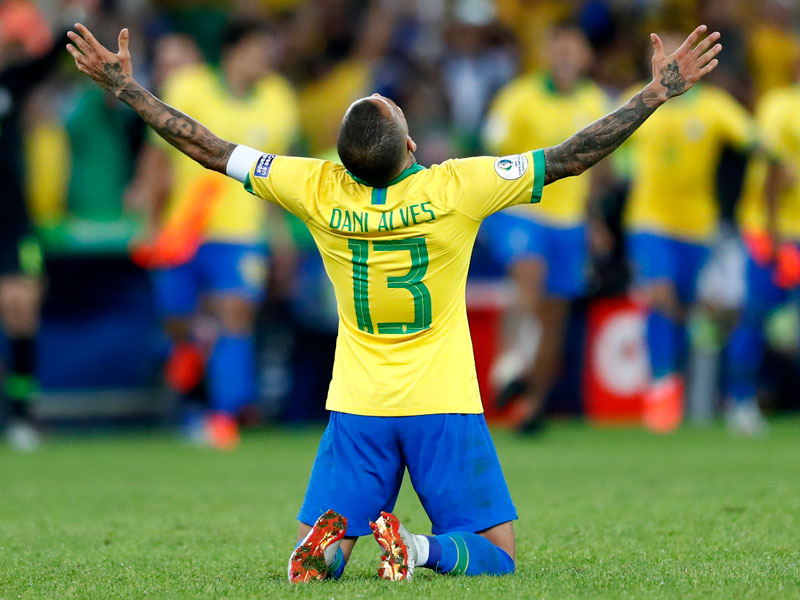 Just over a week ago, Daniel Alves made a dream return to Brazilian football, scoring the only goal in the game as his new club, Sao Paulo, won a league game against Ceara. In midweek they did even better, travelling to Athletico Paranaense, notoriously strong at home, to record another 1-0 win.

A few months ago, in turmoil on the field and off it, Sao Paulo were even been seen as among this year’s relegation candidates. Now the entire mood has changed, with the club playing themselves into the pack who are in contention for the title – and the signing of Daniel Alves has given the place a huge lift.

Brazil’s captain was chosen as the outstanding player of the recent Copa America – which highlighted the fact that even if Paris Saint Germain no longer wanted him, he had plenty of options. There are many places he could have gone. But although he grew up towards the other end of a giant country, Sao Paulo is the team he followed as a boy, and it is the destination that he chose.

He remains Brazil’s right back. He has designs on holding the position all the way until the next World Cup. But he does not feature there for Sao Paulo – not least because they have also acquired the veteran Spanish right back Juanfran. Daniel Alves has been given a free role in midfield, able to construct from deep, orchestrate in the final third and burst into the opposing penalty area.  He even played much of his third game at centre forward.

This, though, was down to special circumstances. Away to Vasco da Gama, Sao Paulo had striker Raniel controversially sent off in the first half. Daniel Alves was sent forward as the team reorganised into a 4-4-1 formation.

The straight red card for Raniel was given for a high foot – one where the player was seeking to bring the ball under control. There seemed to be no malice in his challenge. Most pundits criticized the decision – not least because it took five minutes of discussion between the referee and the VAR team.

The game was goalless at the time. Vasco struck in the second half to interrupt Sao Paulo’s charge up the table with a 2-0 win. Sao Paulo coach Cuca described the sending off decision as absurd, but conceded that Vasco deserved their win, and that they had been the better side when it was eleven against eleven. And the man of the match was a player who had not even been born when Daniel Alves made his first division debut.

Seventeen year old Talles Magno was recently the cause of a legal tug of war between Vasco and the Brazilian FA. He had been called up to play for the national Under-17 side. But Vasco wanted him to play for them against traditional Rio rivals Flamengo. It seemed a huge fuss about a player who only turned seventeen two months ago. He produced flashes of talent in the match against Flamengo, largely eclipsed by his side’s 4-1 defeat. Against Sao Paulo he made it very clear why Vasco had fought so hard to select him.

Certainly Juanfran will not forget his young adversary. The two were in direct opposition, Juanfran at right back, Talles Magno operating on the left side of the attack. The youngster is lanky without being the slightest bit clumsy, right footed but comfortable on his left, strong on the ball with a burst of pace.

He opened the scoring when a corner from the left was flicked into his path. With neat touch he controlled the ball and beat Juanfran to curl home a cool finish with his left foot. And he also began the move that led to the clinching goal, turning Juanfran and shooting from range, forcing the keeper to push out. Vasco regained possession, switched the point of attack and added the second.

Daniel Alves and Talles Magno. Veterans and promises. It is the reality of the contemporary South American club game. The former played his best years in Europe. The latter is unlikely to stay for long. But for one memorable  these two players, born 19 years apart, shared the same pitch.