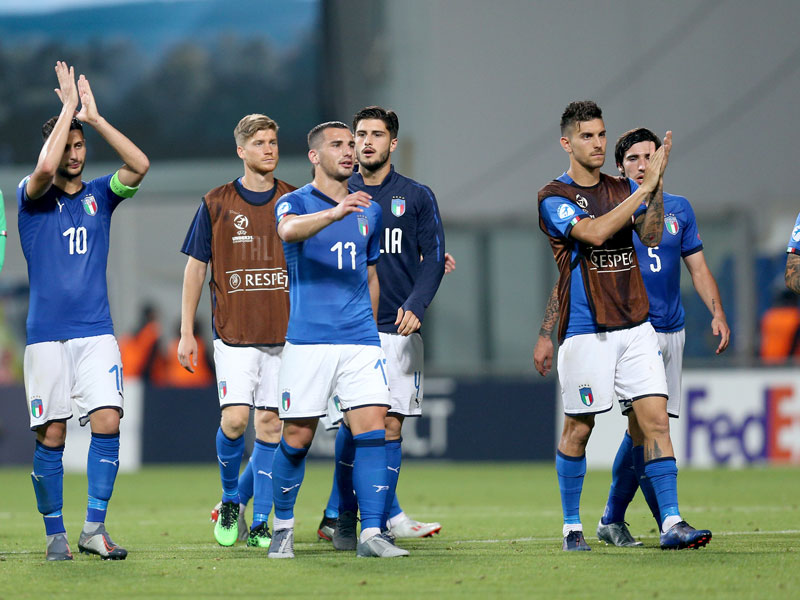 Paddy Agnew’s Notes From Italy: Was Italy’s Under-21 Campaign A Failure?

At first glance, Italy‘s first round elimination from the Euro U21 championships won in Udine on Sunday night by Spain (beat Germany 2-1) in the final would look like yet another flop for Italian football. World Soccer would argue, however, that not all is lost.

Certainly, given the heightened expectations, this was a serious disappointment. Two factors had justified a certain optimism. For a start, the tournament was played on home ground, namely Bologna, Reggio Emilia and Udine. Secondly and more importantly, many critics had understandably argued that this talented team was worthy of a tradition that has seen Italy win five U21 Euros (1992, 1994, 1996, 2000, 2004).

In the end, you had to feel just a little sorry for the Italians. They opened their tournament with an impressive 3-1 comeback win against Spain, the eventual tournament winners. However, they then surprisingly lost 0-1 to Poland before going on to win their third group game, beating Belgium 2-1.

The defeat against Poland, admittedly, had not looked very clever. Playing a tight, cautious 4-5-1 lineup, the useful Polish side scored against the run of play, before then effectively shutting the door on Italy. The home side had started much the better, taking the game to the Poles and creating good chances through Chiesa and Mandragora.

The failure to take those chances reaped its classic reward when Poland scored just before halftime when Arsenal’s Krystian Bielik scored with a well struck, edge of box free kick. Goalkeeper Alex Meret might have done better with his attempted save but…the damage had been done.

Even though the Italians gave it their all in a second half in which Poland’s Liverpool and AGF Aarhus goalkeeper, Kamil Grabara, was kept busy and in which Pellegrini also struck the bar, Poland held on for a fortuitous victory. Italy went on to beat Belgium in their final first round game but Spain’s 5-0 defeat of Poland that same night saw them top the group on goal difference (Italy, Poland and Spain all ended up on six points).

In this short, 12 country tournament which went directly from the first round to the semi-finals, Italy’s only remaining chance at that point was to qualify as the best runner-up. However, that slim possibility went out the window when France and Romania drew 0-0 in their last game in a result which saw both sides go through to the semi-finals. Inevitably, that 0-0 draw prompted some suspicious (Italian) commentary with many recalling the infamous Euro2004 draw between Denmark and Sweden, which eliminated Italy from that tournament. Yet, Italy had only themselves to blame for failing to take their chances against Poland.

Coach Gigi Di Biagio, who has guided the U21 side for the last six seasons, playing 57 games of which he won 28, drew 12 and lost 17, immediately offered his resignation. Di Biagio, who had been expected to resign regardless of the tournament outcome, defiantly defended himself and his team, saying:

“Of course, I’m not happy with the result but I wouldn’t call this tournament a failure…Those who say that this team played badly are not honest. We played well in all three games, we were the team to have most shots on goal and to have had fewest shots on our own goal…

“In one sense, I would say that I have done a good job. One of my mandates was to re-boost Italian football, to help give it a different (attacking) mentality and we saw that in the game against Spain, in the way we tried to close them down in their own half of the field…”

And there is the point. Along with Roberto Mancini, Di Biagio has tried to move on, to play a much less traditional Italian game. Not for nothing, Mancini was one of the first to compliment his U21 colleague, saying:

“Di Biagio’s U21 didn’t deserve to be eliminated. The players and the coaching staff…have done a good job, even if the hard bottom line of football worked against them…”

So, it is not all about results and winning? Of course, it is…but the U21’s performance is not to be thrown out the window. Are the chore elements in this U21 team not now ready to step back up into the full senior team, having to some extent been groomed according to the same positive mindset? Could it be that some of those who encountered disappointment with the U21 team in Italy this summer will gain some measure of compensation at Euro 2020 next year? It is an intriguing thought.