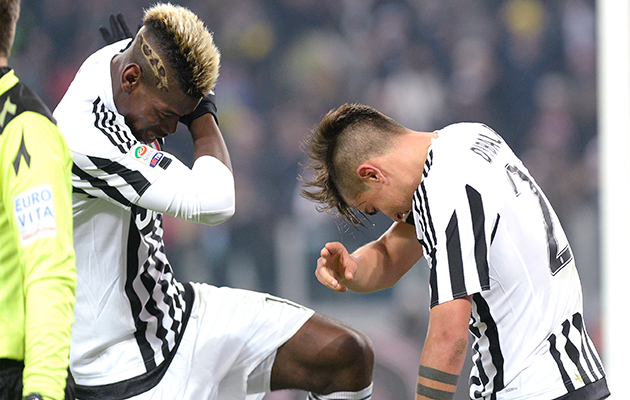 Just when you thought it was going to be a closely fought Italian title contest, the Old Lady upped and did the usual thing, that is she won the Serie A championship by the length of the straight and with three games still to play.

Roma’s 1-0 win over second placed Napoli yesterday, thanks to an 89th minute goal from Belgian Radja Nainggolan, meant that Juventus were able to win their 32nd (34th if you are a diehard Juve fan) league title watching on TV in the clubhouse up at Vinovo, Turin. Even if there is something anti-climatic about mathematically lifting the title without actually taking to the field, there is nothing understated about this fifth consecutive Juventus league title.

Indeed, many would argue that, of these five titles, this fifth one represents the greatest achievment. Remember, this was the season when it all started so badly. After the disappointment of that Champions League final loss to Barcelona last season and following the departure of three key players in Andrea Pirlo, Chilean Arturo Vidal and Argentine Carlos Tevez, many wondered if Juventus might be just a little “vulnerable” this year.

The doubters (or wishful thinkers, given that there always lots of Italian fans delighted to see Juventus come a cropper) seemed to be right as Juventus managed to lose three of her first ten games – to Roma, Napoli and little Sassuolo. At that point, Juve were 12th in the league on 12 points, just above the relegation zone.

That defeat against Sassuolo proved to be one of the many turning points in a remarkable season. After that game, goalkeeper captain Gigi Buffon rubbished his own team, speaking of an “indecent” and “graceless” Juve performance. Next time out, in the always special context of the city derby versus Torino, Juventus got back on the winning path thanks a late, fortuitous goal from Colombian Juan Cuadrado.

That win was the first game in an astonishing comeback run which has seen Juve pick up 73 out of 75 points with 24 wins and one draw. In essence, since that late October loss to Sassuolo, Juventus have won all their games bar one, a 0-0 draw with Bologna in February.

In a season when, albeit briefly, sides such as Roma, Napoli, Inter and Fiorentina all led the championship dance, many of us thought we could be in for a close battle all the way to the finish. We did not reckon with a devastating, unrelenting Juventus. Even if at times Napoli played some of the season’s best football, they eventually cracked under the pressure of trying to match strides with opponents who never gave them a break. Napoli might reasonably have hoped that somewhere along the line, Juventus would drop points to some of the other Serie A “Big Boys” but it just did not happen.

Arguably, the real turning point in this title context came in mid-February when substitute striker Michele Zaza got off the bench to score an 88th minute winner against Napoli in Turin. That result marked the “sorpasso”, with Juventus knocking Napoli off the top of the table, at the end of a closely contested game in which a draw might well have been a fairer result.

Napoli were probably not much helped by Juve’s second round elimination in the Champions League by Bayern Munich. That defeat left the Old Lady free to concentrate all her mental and physical energy on the league title. That defeat, too, at the end of a return leg tie when Juventus had led Bayern 2-0 for most of the match, just missing out on qualification due to an injury time Bayern goal, had also underlined Juve’s quality.

There are many protagonists worthy of a special mention in this season’s success story. 22-year-old Argentine Paulo Dybala, for example, is not only the side’s leading goalscorer with 16 goals but, in his first season at Juventus, he has also proved himself to be a creative schemer of monstruous talent. Frenchman Paul Pogba continues to improve, looking less and less the raw, unfinished article and more and more a player worth €100 million on the market. That is, of course, if Juventus opt to sell him, something which for the time being cannot be taken for granted. 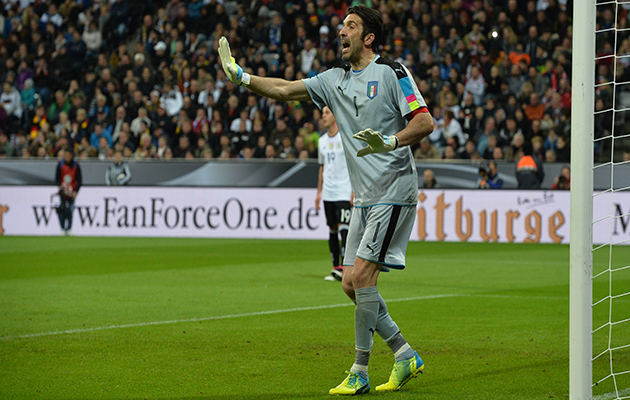 Commanding presence…Juventus skipper Gianluigi Buffon has been at his imperious best this season.

Then, too, there is 38-year-old captain Buffon. An authorative leader off the field, Buffon remains pretty useful on the pitch. At least two saves in Juve’s Sunday night 2-1 win away to Fiorentina (one of them a penalty) would suggest that he remains one of the world’s great goalkeepers. Retirement, it would seem, can wait.

However, if we were to name one person above all at the heart of this success, then it would be coach Massimiliano Allegri. Jeered and booed by fans following his overnight appointment in July of two years ago, many argued that Allegri’s title triumph last year owed more to his predecessor Antonio Conte than to him.

Even if that questionable assessment were true, it certainly does not apply to this season when Allegri had to build a new team without Pirlo, Vidal and Tevez and when he had to hold his nerve during that initial poor seasonal start. The manner, too, in which Juventus stood by their coach, refusing the temptation to go looking for a miracle-working replacement, also says much about the Turin club’s style. This is, after all, a club which works off a serious, unchanging business plan, as evidenced by another of the protagonists of their success, the Juventus Stadium itself.