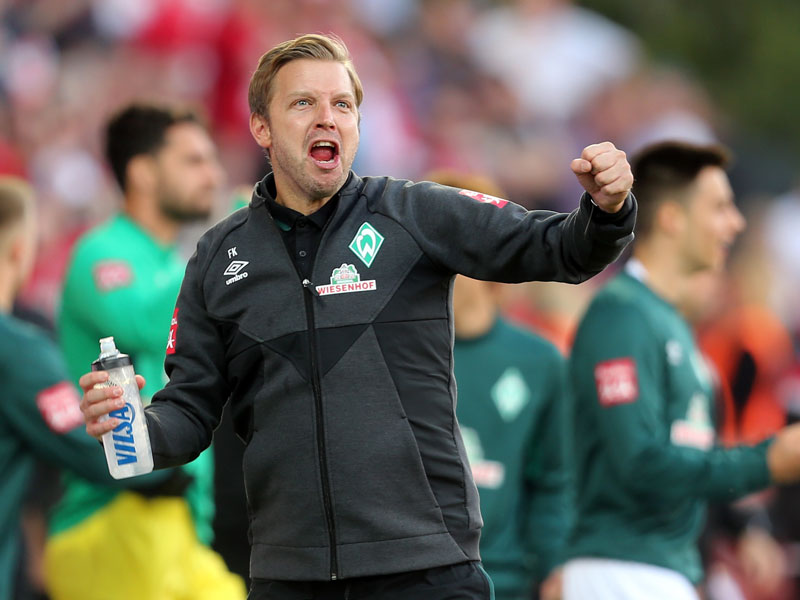 Not all of the best Bundesliga coaches are congregated in the top-six. Some of the ‘inbetweeners’ deserve praise too, not least Werder Bremen’s Florian Kohfeldt, who in the most trying of circumstances, is doing a wonderful job of preserving stability in the Green-and-White camp.

At various points this season, he has had to contend with eleven potential first-teamers out through injury, including main striker Niclas Fullkrug (torn cruciate ligaments in both knees!) and Japanese frontrunner Yuya Osako (thigh). But refusing to panic, Kohfeldt has made light of the decimated squad, his side collecting seven points from their last four games, good enough to have them sitting relatively comfortably in mid-table.

The morale of the story? As long as a coach has a flair for setting up a team and has sound organisational fundamentals, there is no need to give up the ghost. On the 2019-20 starting grid, Bremen’s objective was European qualification. That goal remains.

“What Florian and his staff have achieved in this situation – their excellent work in preparing the team and the conviction with which they have put in place a plan – has been really impressive,” declared Bremen general manager Frank Baumann. “He (Kohfeldt) not only coaches well when everything is right. He shows high quality in difficult times as well.”

Kohfeldt and his charges certainly emerged with a great deal of credit from their recent 2-2 draw in Dortmund. Although on the back-foot for almost the entire first-half, they did not buckle and after the restart, attacked with great belief. They were prepared to take risks and ultimately, were rewarded. Little wonder that Kohfeldt commented that this was a share of the spoils which felt like a win.

Tactically, Kohfeldt more than held his own in his battle of wits with Dortmund counterpart Lucien Favre. Kohfeldt’s decision to push twin number tens (Milot Rashica and Leonardo Bittencourt) as high as possible proved a particularly effective move, thus stymying the string-pulling efforts of opposition midfield controller Axel Witsel. And the former Ajax and Everton man Davy Klaasen was quite outstanding in a roving engine room role, one minute initiating a furious press, the next bursting forward on the left.

Back in the Werder first-team after several weeks on the sidelines with an adductor muscle problem, the Kosovan international Rashica was an especially inspiring performer on the day. According to Bremen insiders, he was anything but match-fit. Yet still delivered in spades, opening the scoring on seven minutes with an emphatic cross-shot and constantly embarrassing the Dortmund back-line with his speed, dynamism and trickery.

“Milot gives an extra dimension to our team,” says Kohfeldt. “He brings a high tempo to proceedings and that makes us much more difficult to predict.”

What We Learned This Week
1. Sharpening the axe ?

The powers-that-be at Hoffenheim have reacted angrily to the suggestion in the Bild newspaper that coach Alfred Schreuder is on thin ice. ” The reaction of Hoffenheim communications chief Holger Kliem ?  ” Absolute nonsense, ” he tweeted. Cynics may well beg to differ. Since taking over in the summer from ‘boy wonder’ coach Julian Nagelsmann – who left for RB Leipzig – Dutchman Schreuder has been clearly struggling. The All-Blues are not playing with the same freedom and verve which characterised the Nagelsmann era and they only have won once in six Bundesliga encounters. Bild claim Schreuder is unhappy with the club’s transfer dealings.

Autumn barely has begun and already top-flight new boys Köln have a bout of the chills, second from bottom in the table, just three points in the bank and defeated in all three of their home games, including a recent 4-0 loss to Hertha Berlin. Sadly, the Billy Goats have not won in their backyard since March.Time for some home truths. “The way we defended today wasn’t worthy of this league, ” coach Achim Beierlorzer told Sky Deutschland. “You shouldn’t be wiped out in your own stadium,” added keeper Timo Horn. “Naturally it’s a setback, but we’ll come again.” They will have to.