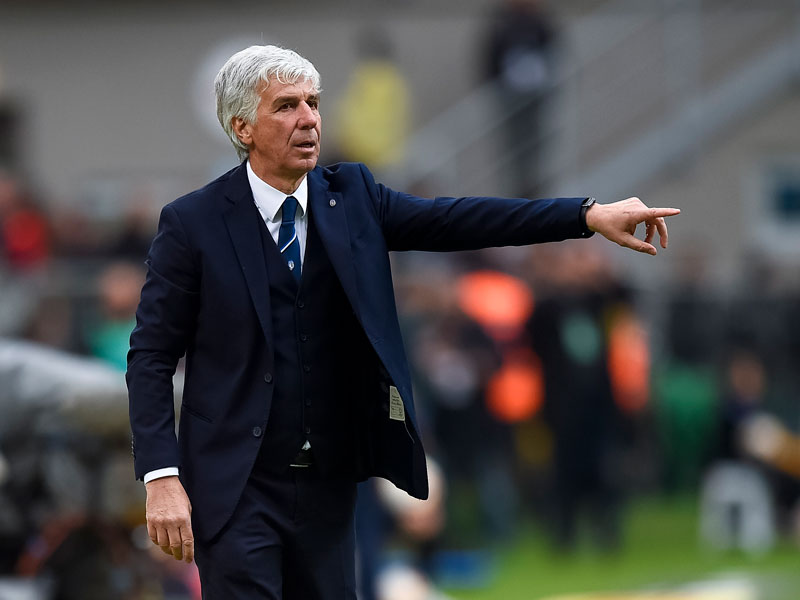 In a period when both the Italian national team and Serie A are struggling to regain the lustre of yesteryear, Gian Piero Gasperini looks more and more like a guiding light for the way out of the wilderness.

In beating Lazio 3-1 at the Olimpico on Sunday, Gasperini’s Atalanta confirmed their fourth place standing in Serie A, taking another significant step along the road to a Champions League qualification, with just three games to play. With three games to play and with Juventus and Napoli already qualified for the Champions League, the top of Serie A now reads : 3rd Inter on 63 points, 4th Atalanta 62, 5th AC Milan 59, 6th AS Roma 59, 7th Torino 57 and 8th Lazio 55

Atalanta, a club with a deserved reputation for developing talented young players, are not meant to be Champions League contenders. They are the King of the Provincials, the side from Bergamo, down the road from Milan, that has played 58 times in Serie A. Over the years, we have come to expect them to survive comfortably enough in Serie A, only occasionally being relegated.

In the last three seasons, however, Gasperini has rewritten the script. In 2017, his first year as Atalanta coach, the club finished fourth, its best ever league standing, whilst last season they finished seventh. Those two results earned Atalanta a crack at the Europa League, a competition in which they were far from disgraced, going out to Borussia Dortmund in the second round last season and being a bit unlucky to go out in preliminaries this season, beaten on penalties last August by FC Copenhagen after two 0-0 draws.

In a year when no Italian clubs made it to the semi-finals of either the Champions League or the Europa League, there has inevitably been a deal of heart searching about the quality of Serie A. Asked by “calcio.fanpage” the other day why Juventus had failed to go further, former England, Real Madrid and AC Milan manager Fabio Capello gave an interesting answer, saying:

“Its not Juventus who are in difficulty in European competition, it is Italian football that is in difficulty…No Italian side has qualified for the semi-finals, so we’ve got to ask why….and it is because we don’t play at an intense rhythm, because our refs blow too many fouls and the game is too interrupted, because we don’t play with the same pace and aggression as they do in other countries…”

Capello went on to say that it “has been years” since he had seen a team play like Ajax, adding though:

“Ajax play a very fast, high quality game, they’re good to watch…In Italy, you could compare them to Atalanta, a side that simply does not let you play, doesn’t let you breathe, which defends in numbers and which attacks in numbers and does not play a lot through through the goalkeeper. I always say that if the goalkeeper gets on the ball 30 times in a game, whilst his striker only gets the ball 10 times, well then something is wrong…”

Capello’s praise for Atalanta is not casual. Not for nothing, Atalanta share with Ajax the merit of having thwarted Juventus having eliminated them from the Italian Cup this season.

Since he arrived in the big time 15 years ago to coach Genoa, it has been clear that 61-year-old Gasperini knows his onions and gets his teams to play organised, attacking and attractive football. When the special one, Jose Mourinho, coached in Italy between 2008 and 2010, eventually leading Inter to a Champions League, Serie A and Italian Cup treble in 2010, one of his first observations was to marvel at the tactical readiness of his Italian colleagues.

Speaking at an awards ceremony in Coverciano, the Italian Federation training centre, Mourinho remarked on “that guy Gasperini” in relation to a recent Inter v Genoa game, saying:

“Against Genoa, I changed my tactical line-up three times but each time Genoa neutralised my moves. As a coach, I thought that this was simply fantastic…”

Ironically, Mourinho’s praise may have earned Gasperini the job as his successor at Inter. That came in 2010 and proved to be a disaster since, having lost four out of five games, he was sacked in mid-September, after less than three months. Objectively, the post-Mourinho Inter was perhaps too psychologically and physically washed up to deal with a new coach.

After spells with Palermo and again Genoa, Gasperini’s renaissance has flourished with a vengance at Atalanta, a club that is nothing if not a developer of talent. Internationals such as Pippo Inzaghi, Christian Vieri, Riccardo Montolivo and Cristiano Doni in times past as well as young players today such as Mattia Caldara (AC Milan), Andrea Conti (AC Milan), Bryan Cristante (AS Roma), Davide Zappacosta (Chelsea), Roberto Gagliardini (Inter) and many others have come through the Atlanta “education”.

Capello, along with many others, has been hugely impressed this season by Atalanta’s blend of unrelenting tempo combined with organisation and quality, a quality best represented in the person of their brilliant Argentine playmaker, Diego Gomez. Against Lazio on Sunday, as so often this season, Atalanta came from behind to run their opponents out of it, looking much the fitter and fresher side, the further the game went.

Lazio, now seemingly out of the Champions League reckoning in eighth place on 55 points, will get a chance to earn some compensation when the two sides meet again next week in the Italian Cup Final in Rome. In the longer term, though, Atalanta, fourth on 62 points, one behind third placed Inter and three ahead of fifth placed Roma, can contemplate a Champions League pay-off next season.

With three games to play, Atalanta’s path to the big time is not prohibitive since they play Genoa, Juventus and Sassuolo between now and May 26th.  Genoa are relegation battlers whilst both the already crowned champions Juventus and middle of table Sassuolo have nothing to ask from their games.    For little Atalanta, it is most clearly still all to play for…

As it is, too, for another historic name, Torino. Held to a 1-1 draw last Friday night in their Turin derby with Juventus, Torino are currently sixth, five points behind Atalanta and two behind fifth-placed AS Roma, held to a 1-1 draw by Genoa on Sunday. Both these clubs can still hope to make a late surge, helped not so much by any weakening on the part of Atalanta but rather from Inter, held to a 0-0 draw by Udinese on Saturday night.

As so often in the past, Inter are working overtime to snatch defeat from the jaws of victory. With games against already relegated Chievo, already Champions League qualified, second placed Napoli and relegation battler Empoli, Inter’s fixture list does not seem intimidating but….

In the meantime, though, a Champions League qualification for Atalanta prompts the intriguing thought that maybe some illustrious rivals could yet learn something from the remarkable Atalanta.