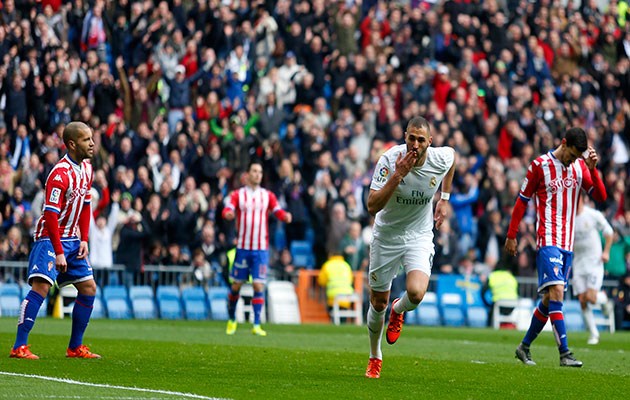 Considering his well documented troubles off the pitch, Real Madrid striker Karim Benzema has remained remarkably consistent on it, with two more goals on Saturday taking his total to 15 for the season.

The better of the two strikes was an acrobatic effort after good work from Gareth Bale down the right flank. The finish was emphatic and instinctive and showed that whatever might be happening in his private life, the French forward is not letting it affect him on the pitch.

A similar goal to Benzema’s came courtesy of Leonardo Pavoletti, who slammed home an acroobatic volley in his side’s 4-0 win over Palermo. Showing fantastic technique, the striker turns mid-air to connect perfectly to give the Palermo goalkeeper, Stefano Sorrentino, no chance at all.

Alvaro Negredo was on target with a fantastic piece of opportunism in his side’s 2-2 draw with Ray Vallecano. Spotting the Rayo goalkeeper lurking on the egde of his penalty area, Negredo fired a lofted shot from 45 yards over the backpedalling Juan Carlos. The keeper will not be happy with his postitioning, but that should not detract from the quality of Negredo’s finish.