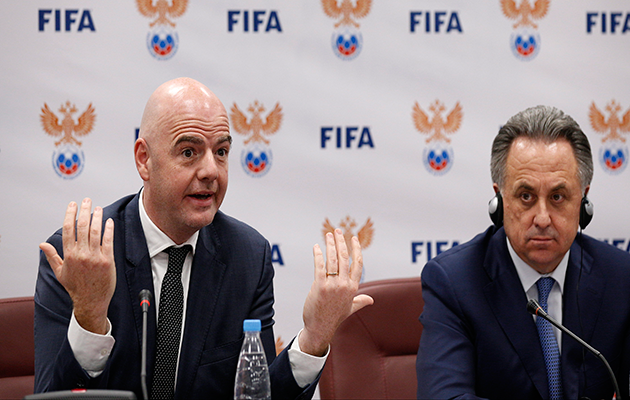 Russian sports supremo Vitaly Mutko has been barred from standing for re-election to the governing council of world football federation FIFA.

The decision will be seen as a major diplomatic and personal snub to Mutko who was promoted to Deputy Prime Minister from Sports Minister last October and is president of both the Russian Football Union and of the 2018 World Cup local organising committee.

A thumbs-down verdict on Mutko from a FIFA review committees in an eligibility check was confirmed by a statement of his own to the Tass news agency.

Mutko was quoted as saying: “I wanted to be re-elected but FIFA has changed its criteria. A new criterion has been introduced: political neutrality. They want the organisation to be politically neutral so that officials and representatives of the government don’t get elected and that’s their right.”

The 58-year-old’s status had come under question with his current four-year term end at FIFA congress in May and in the wake of the Russian doping scandal which has riven the Olympic movement.

The country’s track and field athletes were barred from competing at the Rio Games last year and Russia was suspended in its sporting entirety from the Paralympics. Various world championships have been switched away from Russia.

However, in Mutko’s case, it is understood that the problem is unconnected with the doping issue and owes everything to the incompatibility of his holding both senior political and sports leadership roles.

Earlier this year FIFA president Gianni Infantino was reported to have warned Mutko that the dual roles meant he was heading for trouble, though both men denied any such conversation. Mutko has been a member of the former FIFA executive committee since 2009.

The doping scandal revealed by Russian whistleblowers to a German television channel led to two damning investigations and reports to the World Anti-Doping Agency by first Richard Pound and then Canadian law professor Richard McLaren.

In fact, although McLaren reported evidence of an institutionalised doping and cover-up system in Russia, his final report did not point a direct finger of blame at Mutko whose Deputy Sports Minister, Yuri Nagornykh, was subsequently dismissed.

Mutko was among five candidates for four terms of four years on the FIFA Council from European federation UEFA. His removal from the scene means the remaining four, all clear to be elected unopposed, are Sandor Csyani (Hungary), Costakis Koutsokoumnis (Cyprus), Dejan Savicevic (Montenegro) and Geir Thorsteinsson (Iceland).

Germany’s Reinhard Grindel is the only candidate for a further European place, which has a two-year term.

His election will revive a presence on the Council for Germany whose former DFB president Wolfgang Niersbach was banned from football last year by the FIFA ethics committee for reasons connected with the 2006 World Cup organisation.

FIFA statutes state that all those representing continental confederation such as UEFA must be “independent and avoid any form of political interference”.

Eligibility checks on candidates for FIFA office were introduced last year among reforms following the long-running corruption scandal which decimated the executive committee and also brought about long suspensions for Sepp Blatter and Michel Platini, former presidents of FIFA and UEFA respectively.

Last autumn the Asian confederations election to FIFA Council were thrown into chaos by the eligibility failure of a Qatari candidate. This past week South Africa’s FA president Danny Jordaan was among candidates blocked from standing for African confederation seats around the world game’s top table.