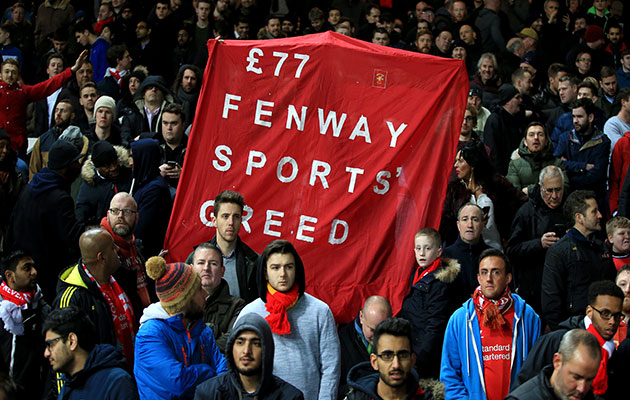 Liverpool have performed a U-turn over their planned ticket price rises and apologised to supporters who protested against the changes by walking out of Saturday’s game against Sunderland.

The club’s owner, Fenway Sports Group, has agreed that general admission prices be frozen at 2015-16 levels for the next two seasons, and that the number of £9 tickets be increased to 10,000 across a Premier League campaign.

In an open letter to the club’s fans owner, John W Henry, chairman Tom Werner and FSG’s president Mike Gordon concede “part of the ticketing plan we got wrong” and that the reaction of the fans had prompted a re-think.

An estimated 10,000 fans walked out of Anfield in the 77th minute of last Saturday’s match in protest at the plan to increase the most expensive ticket at the redeveloped main stand to £77.

That particular ticket as well as the season tickets of £1,029 have been scrapped. Instead, they will remain at £59 and £869 respectively.

“It has been a tumultuous week,” began the letter signed by Henry, Werner and Gordon.

“On behalf of everyone at Fenway Sports Group and Liverpool Football Club we would like to apologise for the distress caused by our ticket pricing plan for the 2016-17 season. The three of us have been particularly troubled by the perception that we don’t care about our supporters, that we are greedy, and that we are attempting to extract personal profits at the club’s expense. Quite the opposite is true.”

The letter states the new main stand is being constructed thanks to a “£120m advance from FSG” – an interest-free loan – but the scale of the opposition forced a review of the ticketing price structure. “The widespread opposition to this element of the plan has made it clear that we were mistaken,” it adds.

“A great many of you have objected strongly to the £77 price level of our most expensive GA [general admission] seats and expressed a clear expectation that the club should forego any increased revenue from raising prices on GA tickets in the current environment. Message received.

“We believe we have demonstrated a willingness to listen carefully, reconsider our position, and act decisively. The unique and sacred relationship between Liverpool Football Club and its supporters has always been foremost in our minds. It represents the heartbeat of this extraordinary football club.”

The club has also agreed to end game categorisation, the system whereby supporters currently pay for six category A games a season, 10 category B and three category C. Frome next season onwards, matchday tickets next season will be the same price regardless of Liverpool’s opponent and proposed £9 seats for category C matches will now be available for every Premier League game.

Liverpool’s climbdown was welcomed by supporters’ groups Spirit of Shankly and Spion Kop 1906.

A joint statement read: “Although the last week has been a sorry tale in the recent history of the relationship between owners of LFC and the club’s supporters, it has also seen both the best of what Liverpool FC supporters are about and the incredible power those same supporters have to promote change for the better at LFC.

“Today’s announcement has to be seen a positive step in repairing the relationship between owners and supporters. If they had recognised what was being said by supporters about the impact of the original price rises (perhaps by actually meeting with their own Ticketing Working Group) then much of the embarrassment and upset of the last four days would have been avoided. It is a sobering lesson in listening to your supporters properly.

“We welcome these changes from the owners and that they have recognised the mistake made and apologised for it. We take no delight in them being wrong. It helps no one. What is important though is that a lesson is learned and that proper engagement and taking note of supporters’ concerns occurs and those views are taken more seriously. We started this process to make football cheaper for all LFC supporters, to make it fairer and to increase access for younger and local supporters. This proposal is not our panacea.

“More must be done to make football affordable. However we have always stated that this is a journey that the owners should embark upon and this is a positive step in the right direction towards fairness and away from greed, but it is only one step.

“We will now take this opportunity to review the numbers and their impact upon supporters, we will be speaking to the club about it and we will speak with supporters to get their views. The Spirit of Shankly and Spion Kop 1906 believe that given the fact there has been this reconsideration by the owners, it is only fair and appropriate that we reconsider our next steps until the full impact of these changes can be established.”