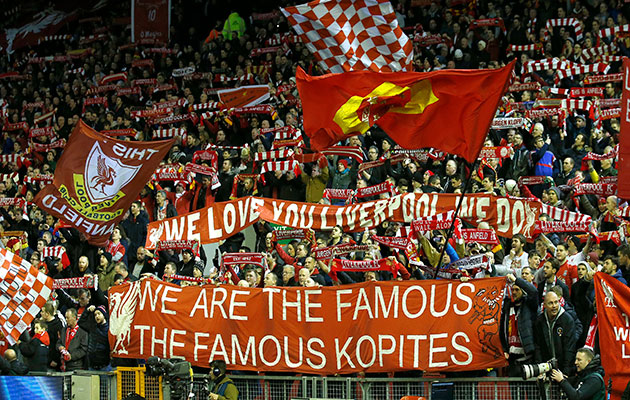 Liverpool fans plan to stage a walkout for the first time in the club’s history, to show their opposition to the club’s new ticket pricing policy.

The demonstration is planned for Liverpool’s next match at home to Sunderland on Saturday. Supporters’ groups are urging fans to leave their seats in the 77th minute of the game to show their opposition to next season’s proposed price hike.

The most expensive ticket in the newly rebuilt main stand has been set at £77, up from £59. Two Liverpool supporters groups the Spirit of Shankly and Spion Kop 1906, have been in talks with the club over the proposed changes which will result in the most expensive season ticket being priced at £1,029.

Liverpool claim 64% of season tickets would decrease or stay the same price, and highlighted a new initiative whereby local fans could buy tickets for as little as £9, but furious supporters have pledged to fight the changes.

“Liverpool think it is acceptable to make more money than ever before from supporters,” a statement put out by the Spion Kop 1906 group read.

“There are some small reductions but the news overall is that prices are going up by quite large amounts,” a Spirit of Shankly spokesman said.

“This is despite the fact that the club promised to work with supporters’ groups and take their views on board. In dealings we have had with the club the people at Anfield have always been reasonable and approachable, our frustration at these unnecessary price hikes is entirely with the owners. We believe the decision making here has come from Boston [where the Fenway Sports Group is based].”

Spirit of Shankly have asked that as many fans as possible join in with Saturday’s walkout.

“There have been demonstrations at Anfield before, but never a walkout protest,” the SoS spokesman said. “It is something of a first and we have no idea how it will go, but one thing that is certain is that hundreds of supporters and season-ticket holders are furious about the prices going up again. If as many people walk out as have contacted us over the last couple of days the effect will be noticeable.

“We are obviously not taking this decision lightly, we are supporters of the club after all, but this is now a moment in time for fans to show how they feel about constantly being asked to fork out more. If people do not take this opportunity to register a protest we will be seen to be accepting of the price rises and the moment will have passed.”

Ian Ayre, Liverpool’s chief executive, defended the club’s strategy by saying the prices were agreed after consultations with supporter representatives.

“What is affordable to one person is different to another,” Ayre said. “With that in mind we tried to create a range of prices. We have listened to fans’ concerns and come up with some new initiatives, and we hope there is something for all.”