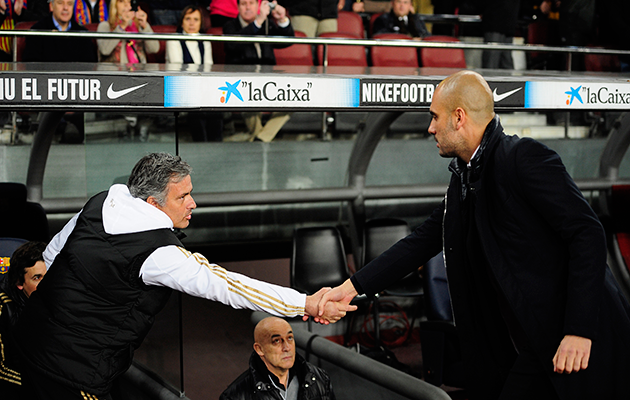 Newly appointed Manchester United manager Jose Mourinho says he has no intention of reigniting his feud with Pep Guardiola, the man who has taken over at rivals Manchester City.

Mourinho has said that to do so would result in “someone else” winning the title.

The duo’s enmity dates back to their time in Spain, when Guardiola was in charge of the all-conquering Barcelona side, while Mourinho was appointed as Real Madrid coach and given a brief to end the Catalan supremacy.

The simmering antagonism between the pair exploded in 2011 shortly before a Champions league semi-final between the two sides when Guardiola, responding to provocation from Mourinho, delivered an uncharacteristically caustic attack on his rival.

“In this room [Real Madrid’s press room], he is the chief, the fucking man. In here he is the fucking man and I can’t compete with him. If Barcelona want someone who competes with that, then they should look for another manager.

Pep Guardiola on Jose Mourinho in 2015

However,  Mourinho has warned that a repeat of such hostitilty in the Premier League would be counter-productive and would merely play into the hands of rival contenders.

“[What has happened in the past] does not allow me to be innocent,” he said, speaking in Lisbon, where he was giving a lesson to post-graduates on football coaching.. “For two years Pep and I were in a league where the champion would be either me or him, Real Madrid or Barcelona.

“In a situation like this, individual fights make sense because they can influence things. [But] in the Premier League, if I focus on him and Manchester City, and he on me and Manchester United, someone else is going to win the league.”

Mourinho was confirmed as United’s new manager last week – while Guardiola’s appointment was announced in February – and he admitted he is interested in signing Zlatan Ibrahimovic, who is a free agent after leaving Paris Saint-Germain.

Last week Ibrahimovic was complimentary about Mourinho but the Portuguese coach refused to say whether the Swede would join him at United next season.

“My good friends always rave about me,” he said.