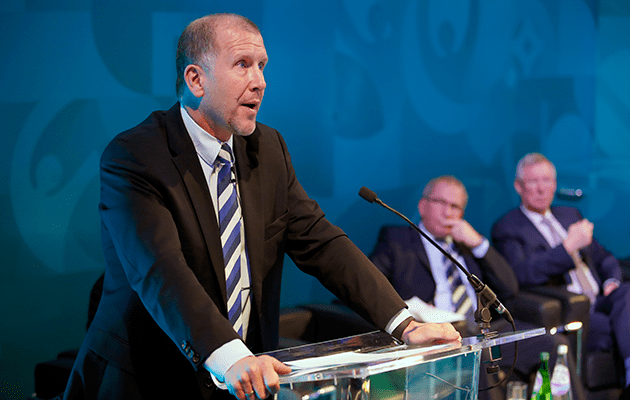 Scottish clubs are in danger of being left behind and should consider playing in a cross-border league, says the CEO of the country’s FA.

Stewart Regan believes such a league – sometimes referred to as the Atlantic League – would bring sporting and commercial benefits to participants. Regan is a member of a Uefa working group investigating how such a league be realised.

Among the proposals is that Scottish clubs who drop out of Europe before Christmas could enter a cross-border league involving teams from neighbouring countries. One potential option would see groups of six regional countries, such as those in northern Europe combine to play in tandem with their respective domestic leagues.

“We are in danger at the moment of keeping perpetuating the Champions League brand as the answer to everything. It has been a fantastic journey and a fantastic success but there are signs now emerging that it is peaking. In any other brand, at the point of large peaks you do something else. I think people will get bored with Champions League predictability, particularly in markets where your own country isn’t represented for long spells in the season.

“How do we keep the dream alive in Europe? For me, that is cross-border. It is giving clubs the chance to play against other big teams for a big prize. That prize might be entry back into the Champions League.

“Not every year and with the recent exception of Celtic and Rangers, most of our teams historically have been out [of Europe] by Christmas therefore European dates are free during the second half of the season. If you look at the TV audiences at the moment in the markets where teams are out, the Champions League audiences are in decline. The English Premier league in countries around Europe is starting to gain more traction than Uefa’s own competitions.

“What we are saying is: ‘How do we address that?’ because if we do nothing, the big countries will get bigger and bigger while the small countries will never be able to compete in Europe.”

Regan believes the issue needs to be addressed sooner rather than later, or the status quo will simply be reinforced.

“I think the way European competition is going, the less Uefa responds before the next television deal – post-2021 – they will miss the chance to test the validity of cross border competition,” he said. “Then, the big will just keep getting bigger.”

He believes that playing standards will improve if Scottish players are regularly tested against foreign clubs.

“We need to play against the best players to develop our own,” he added. “There is a football argument here which is best versus best. You can look at the best players in Scotland and ask why there aren’t multi-million pound bids coming in.

“The quality of the league is the issue and we are struggling to punch above our weight in terms of the perception of our league, when you compare it to others. Our league is not seen as a place where players are developed because if they are against average players, week in, week out, rather than world-class players then they are never going to become world class.

“From a football point of view, I think there is that real best versus best opportunity,” Regan said. “From a commercial standpoint, having your clubs playing European competition after Christmas as well as competing domestically I think gives another string to the bow.

“Whether that is attendances, television revenues, additional sponsorship or exposure outside of your own country. You can build a brand.”