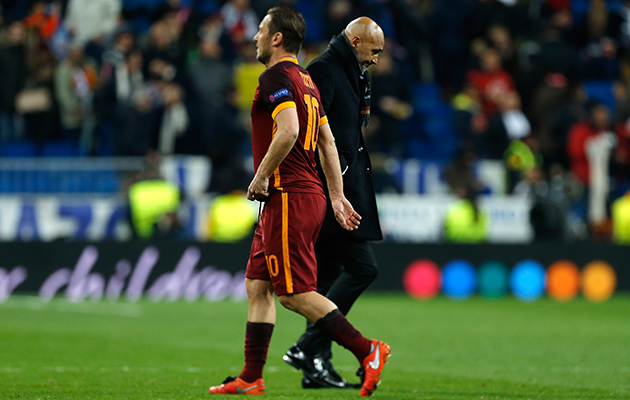 Reports in Italy suggest that Roma coach Luciano Spalletti will resign if the club offers Francesco Totti a new contract.

There were claims of an altercation between Spalletti and the talismanic Roma skipper after Sunday’s 3-3 draw with Atalanta, although both have since denied a rift.

Totti’s contract expires this summer and although he will be 40 in September, he has made it clear that he would like a one-year extension. He has played just 8 Serie A matches this season, scoring twice, his most recent goal, being the late equaliser that secured a point for Roma against Atalanta on Sunday.

Roma Radio has now reported that Spalletti has told the club that he would be willing to leave if they decide to accede to Totti’s request for a new contract.

The former Zenit boss, who replaced Rudi Garcia in January, has made an immediate impact since his arrival, taking the club into third place and putting them on course to claim a place in next season’s Champions League.

Meanwhile, Roma President James Pallotta has moved to play down the row between his coach and captian, claiming it was ‘something that happens in every dressing room’.

“On Sunday something happened that goes on in every dressing room, the question isn’t very important for me,” the Giallorossi President told Corriere dello Sport.

“Quite the opposite, it has no importance at all. I’m not talking to anyone about what I say to Francesco, except to Francesco.”

Since making his debut in 1992-93 sseason, Totti has made more appearances (753) for Roma than any other player, scored more goals (301) and is currently Serie A’s leading goalscorer among all active players (245 goals). His iconic status among Roma fans and within Italian football in general is assured. Nonetheless, his status remains a headache for Spalletti or any potential successor looking to create a post-Totti Roma.