Revealed at the 2018/19 League phase draw, the UEFA Nations League trophy was unveiled in Lausanne earlier this year.

UEFA President Aleksander Ceferin was the man responsible for showing the world the new trophy which will be awarded to the winning team in June 2019.

Interestingly, the design was inspired by the UEFA Nations League logo which is a flag that represents each of the 55 teams taking part in the tournament.

This flag design is wrapped around the centre of the trophy.

“The first thing we wanted was for people to start thinking what this trophy represented – the pinnacle of a nation, the raising of a flag,” said Hélder Pombinho, creative director of the brand agency responsible for the trophy. “When we see this trophy being raised, that’s what we imagine, as if we were watching the flags of all the nations being raised, as the high point of winning this tournament.”

Made entirely out of silver, another interesting trait, and a unique aspect of the prize, is that the official colours of the tournament are reflected on the inside of the trophy.

All in all it weighs 7.5 kilograms and is 71 centimetres tall. 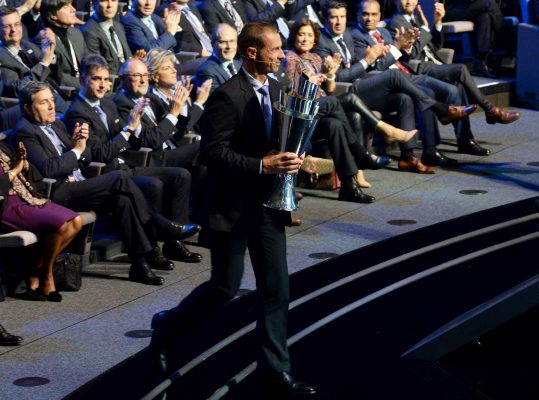 Another aspect of the tournament that was unveiled that night was the tournament anthem. Performed by Opera de Lausanne choir, the anthem looks to emphasise that every game counts.

It combines classical components with electronic music to create a different and contemporary piece of music.

The tournament is set to begin in September with additional games taking place in October and November as well. The final will be played in June 2019.