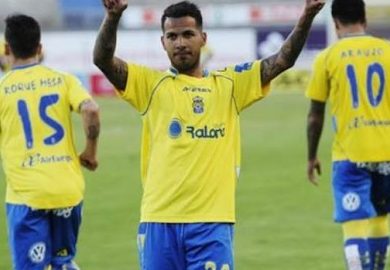 Two games into the season and only three teams have six points. Two of them are those two; the other is the team that are top. It is the first time they have been there for thirty-eight years and they’re guaranteed to be there for another two weeks at least, as everyone heads off on international break.

Time to enjoy it … almost as much as everyone who has watched them playing enjoys it. “My style of football is non-negotiable,” says coach Quique Setien, a former player who always stood out for technique more than temperament, who loves chess, loves football more and who seems to have little time for the nonsense that goes with the game and all the time in the world for the game itself. And his team’s football is so much the better for it.

Setien is the man who went largely unnoticed, and unapproached by most clubs until Canary Islands came calling; who changed them completely back then when he took over and has carried on where he left off since, helped by the form of Jonathan Viera – taking over the shirt left by Juan Carlos Valerón, the slow motion genius who Setien admitted could make him cry, he was so good – and the fact that they resisted a bid from Sevilla for Roque Mesa, the deep midfielder that underpins it all.

Last season, it took until December for Las Palmas to score nine league goals; this season, they have nine in just two games: four against Valencia in week one, five against Granada in week two. The second of them scored by Kevin Price Boateng and celebrated with a t-shirt in support of the victims of the Italian earthquake.

Nine goals from just eleven shots. Not because they’re lucky, but because the chances they create are so clear that they’re virtually walking the ball in.

Swift, incisive, playing with pace and precision, Las Palmas use the ball so well. When they defend, they do so with an idea in mind: attack. Rob and run. Very, very fast. Very precise too: this isn’t tackle, hoof, chase. Instead it’s ping, ping, ping, goal. It has been so far, anyway. And it has taken them to the top for the first time since 1978, when Quique Setien was a nineteen-year-old kid starting out in Santander.

**Ah, oh. Forty goals in week one, just seventeen in week two. The goals had gone, except in Las Palmas and in Barcelona, where Espanyol drew 2-2 with Málaga. Sevilla went from ten goals in a game to none, which didn’t help, and there were 0-0s in Seville, Villarreal, Vitoria and Leganés. Not that anyone minded down in the satellite town south of Madrid; in fact, they loved it. In the second week of their first season in the top flight, Leganés drew 0-0 with Atletico Madrid to go with the 1-0 win at Celta on the opening day, meaning that they’re still unbeaten. Better still, they’re the only team yet to concede a goal in the first division

**And so to deadline day, that weirdly celebrated festival of plenty and a time of worry for some Spanish clubs. A day when late deals can leave them well and truly stuffed. Here, more than anywhere else. Because here, players’ buy-out clauses can leave clubs powerless, unable to stop footballers leaving and lacking the time to replace them. This summer, the Spain-England route has been busier than before – with English clubs not just taking the very best from La Liga but arriving with huge bags of cash to take the next tier down too – and there may yet be more on the final day. Time to fix up those fax machines.