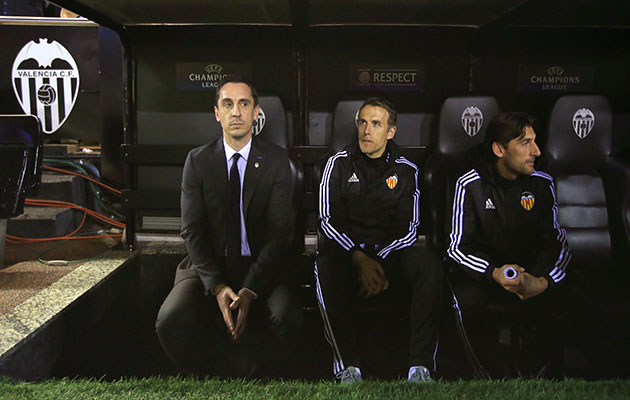 There they were again. For the third time in five days, there were fans waiting for Valencia at their Paterna training ground. Angry, upset fans, sick of it all, chanting in protest. Desperate for something to change, pointing the finger of blame and shouting abuse.

It was a Sunday night and Valencia had just got back from Seville. As the team left Real Betis’s Benito Villamarín stadium, their manager Gary Neville had approached a couple of supporters waiting near the team bus. Mostly it was amicable enough: a quick photo, an autograph and that was more or less it. But as he approached, one did say: “this team can’t keep laughing at us.” And that is how some are starting to feel.

After Valencia were hammered 7-0 by Barcelona in the Copa del Rey, Neville said: “Let’s be clear, on Sunday we have to deliver.” On Sunday, they did not. They travelled to Real Betis, the team with the worst home record in the division, a side who had only scored seven times in front of their own fans, and still they were defeated. A Rubén Castro goal sealed it.

“We have to say sorry to the fans, again,” striker Álvaro Negredo admitted afterwards. The key word was “again.”

Valencia have not won in eleven league games, nine of them under Neville. Nine times they have played, nine times they have trailed. They have been able to come from behind to draw with Eibar, Getafe, Real Madrid, Rayo and Deportivo. But two successive defeats against Sporting Gijón and Betis, two relegation candidates, plus that Copa del Rey destruction, have put them in a precarious position.

Few blame Neville directly for their crisis, which runs deeper, much deeper than just the manager, but many are now asking if he is the solution.

“He hasn’t put a single drop of water on the fire that Lim started,” one columnist insisted.

When he took over, Valencia were five points off a Champions League place. They are now 14th, just four points off the relegation positions. A league table of results since he arrived in Spain would have Valencia bottom.

“It is completely unacceptable,” Neville admitted. He did not want to be drawn when he was asked: “are the team now in a relegation battle?” The answer is: they may well be, yes.

Pushed, Neville eventually claimed that his side has “more quality” than the teams at the bottom. They have less quality than some think but that is certainly true. Just as true, though, is that down the bottom is where they find themselves.

“That’s the reality,” Neville conceded, insisting that “every defeat feels like a punch in the face.”  His contention, though, was that it shouldn’t be. Neville claimed that he should have sat in the press room at the Villamarín “smiling, having won three or four games in the league.” Instead, they have won none.

“I said before I came I would be judged in five months,” Neville said. “[But] the obituaries have already been written,  have been judged in six weeks. I believe in the work we’re doing, there is structure, belief, organisation, far better fitness … I don’t believe the results reflect the work, the effort, the order we are now seeing in the performances. These things can happen; it is happening to me at the moment.”

Neville included in those should-be-wins the game that had just finished, and it is true that they had a late goal scored by Mustafi ruled out for a questionable decision. Yet just as questionable was his assertion. For the first time he did not really convince in the press conference, where he is normally so impressive — on the day that he said “you don’t win games in here.”

Yes, they should have beaten Sporting — Negredo missed three great chances — and yes they might have beaten Madrid, when Negredo missed a one-on-one at the end. But that’s about it. Valencia have not really been unlucky; mostly, they have just been poor. Or to put it another, somewhat blunter, way: a banner declared “less problems, more bollocks”, but you’d think they’d seen enough bollocks for one season.

Super Deporte, the local sports tabloid, claimed: “This Valencia is insulting 96 years of history, the players are not honouring the shirt they are wearing … the fans are angry and we understand that because they see the badge being insulted game after game.”

Neville refused to resign after the Barcelona defeat, responded sharply the three times he was asked. After the Betis defeat it was the same.

It is not unanimous by any means, but the voices calling for his head are growing, the pressure too.

“The only thing elegant about him are his Oxford Street jumpers,” complained one veteran journalist, “if he truly was an English gentleman, he would resign.” “Gary, game over,” read one banner held by fans at Paterna. Some chanted: “Gary go now!”

The club’s sporting director Suso García Pitarch has looked at alternatives and there have been suggestions, filtered by García Pitarch himself, that he would favour sacking Neville and that he would like to persuade the board to do so. But the manager knows he has the backing of the man that really matters: the club’s owner Peter Lim.

The former goalkeeper Santi Canizares, now a TV pundit as Neville was before, and a critic of the current régime, was adamant: “Valencia need a change but only Lim or Neville can make that happen. Peter Lim is putting his friendship with Neville above the interests of the club.”

As for Neville, he announced his determination to “turn this round”, insisting that he believes in himself.

“I am aware of the consequences when you don’t get good results. What matters are results,” Neville said. “As for me, I just work. My belief is strong, always had been. There are no words I can give you to make you not ask [about my future].”

The only way is to win, Neville knows. Two days later he was back in the press room again, where questions about his future were banned, the focus purely “on the football”.

“I have faith in myself and in the players and the only way to turn this round is to win games, “ he said.