Five weeks into the season and two managers have gone already. Mind you, the first of them may not need to worry. He could be back in work already – replacing the second of them. If, that is, the Spanish football federation (the RFEF) lets him, which it might not. In fact, right now, it will not. Or so they say.

Confused? Not half as confused as Valencia seem to be. So, let’s try to explain.

Valencia sacked their manager Pako Ayesteran after he started the season with four consecutive defeats – the joint worst start in the club’s history. The man they would like to replace him is Marcelino García Toral, who Villarreal sacked first, back in August.

The problem is that RFEF rules state that a manager cannot take charge of two different clubs in the same season. Valencia’s argument is that Marcelino would not break that rule as he was sacked by Villarreal, having fallen out with the directors, before the season began. He did not sit on the bench for a single league game. The RFEF say that, contractually speaking, the season starts on July 1, but Valencia haven’t yet given up.

In the meantime, their coach will be the match day delegate Voro, who is taking over as caretaker for the fourth time. He has a better win-record than anyone else in the club’s history, but he has no intention of taking the job full-time and they have no intention of giving it to him.

Maybe they should. He couldn’t do much worse than the last lot.

But then, maybe it’s not all the managers’ fault after all, eh?

Give it a week or so – less, they hope – and Valencia will be beginning their sixth (yes, 6th) managerial stint since the start of last season. Four coaches have been sacked in little over a year. Time to look elsewhere for someone to blame, perhaps? 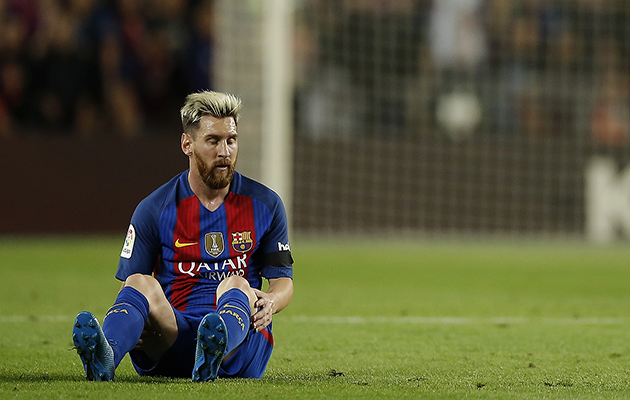 Messi sits on the turf during Barcelona’s 1-1 draw with Atletico Madrid.

Barcelona lost a one-goal lead against Atlético Madrid in the game they were calling Spain’s “Other Clásico” – a fascinating 1-1 draw at the Camp Nou. They also lost something much more important. Leo Messi walked off on the hour. Slowly and in pain.

There was something in the way that Andres Iniesta bowed down and kissed Messi on the head as he sat on the turf pulling down his socks and untying his boot, that suggested that this was serious. And the club later confirmed he had torn a muscle in the groin.

He is expected to be out for three weeks, which is not as long as some feared but this goes deeper. There seems to be an awareness that Messi, who was suffering chronic pelvic problems at the start of the season, needs to be protected and looked after. But it also seems that few are prepared to actually do so, including Messi himself.

He went on international duty when he probably shouldn’t have, playing just one of two games, and he then sat out against Alavés – only to have to come on as a second half sub to try to rescues his trailing side, which he couldn’t do.

“We need to protect him but it’s not easy with this calendar,” Luis Enrique said. What’s that slogan again? The one used by the company that makes Nike’s kit? Just do it. 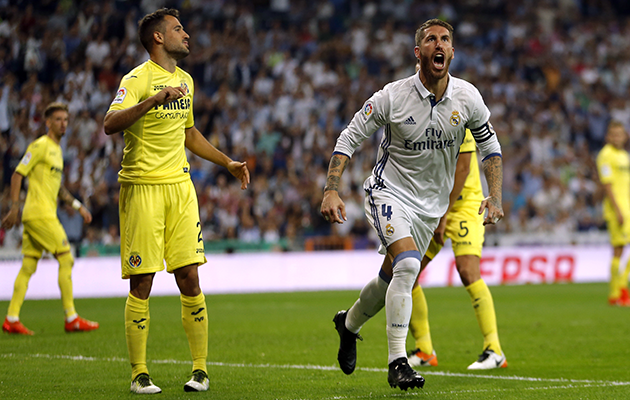 Sergio Ramos is as Sergio Ramos does. He produced the most Sergio Ramosy performance of all as Real Madrid lost their 16-game winning run with a 1-1 draw at the Bernabéu against Villarreal.

First, he committed a handball only to fall to the floor pretending to have actually been hit in the face. He had done exactly the same the game before against Espanyol but this time he didn’t get away with it. Bruno clipped in a lovely Panenka penalty to take the lead. And then he went up the other end and headed Madrid back into it.

Ramos was everywhere, as ever. And it’s hard not to love him for it, even when you’re tearing your hair out, as some fans are. Somehow, he seems to find a way of sorting everything out. And no one has that ability to appear at the biggest moments of all like he does.

He’s on course to collect more yellow cards, and more reds, than anyone else ever. He’s also on course to be the highest scoring defender in the club’s history. Including arguably the most significant goal of them all.