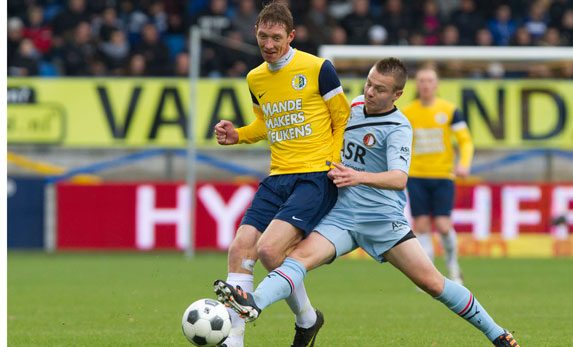 The revelation of this season’s Eredivisie is not one to cut and run. While so many recent products of Feyenoord’s academy have flown the nest at the first opportunity – Jeffrey Bruma and Nathan Ake (Chelsea), Kyle Ebecilio (Arsenal), Karim Rekik (Manchester City) and Rajiv Van La Parra (now back in Holland with Heerenveen after a stint in France with Caen) – Clasie was more than happy to stay, demonstrating a preference for the in-house and the organic which is now reaping huge dividends.

In his eyes, Feyenoord are not merely employers or a staging post on the road to a bigger payday. With the club since the age of nine, he has a deep attachment to the Rotterdammers’ famous red-and-white-halved shirts and after just six months in the first team he is adamant that a transfer abroad
is not around the corner.

“I’m not going to judge the guys who left,” says the Dutch under-21 international, a diminutive but intensely-driven central midfielder with more than a hint of Wesley Sneijder in him.

“They had their reasons. I can only speak for myself and I’ve always thought it best to complete your football education where you’re the most comfortable – and Feyenoord is my place.

“Ever since I was a kid my aim was to become a professional here, to regularly play in front of full-houses at De Kuip. That dream has now come true, but it doesn’t mean it’s the end of the story.

“I want to make a name for myself at Feyenoord, help the club win things again.

“I’m under contract until 2015, so any move abroad is much further down the line as far I’m concerned.”

Born and raised in Haarlem, to the west of Amsterdam, he is, however, every inch the archetypal Rotterdam footballer: gutsy, proud and busy. He competes with the heart of a warrior and generally makes up for his lack of inches with quick thinking and all-round liveliness. His passing, long or short, is crisp and accurate, he is clever in his support play and, all in all, he keeps the Feyenoord motor running. Not for nothing is his role model Barcelona’s Xavi.

“I wasn’t taking any risk at all when I included Jordy in the first team at the start of the season,” says coach Ronald Koeman. “He was ready in all ways. He had the ability, confidence and desire and what’s more he’s Feyenoord-crazy.

“He had just completed a very successful year on loan at Excelsior [the Rotterdam outfit and Feyenoord feeder side] and proved he could cut it at this level. The fans here love him and so they should.”