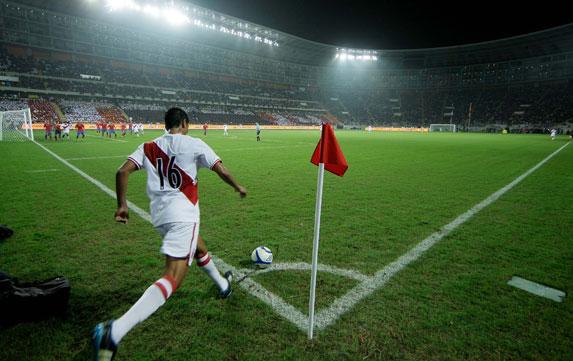 As the Juan Aurich players celebrated a first Peruvian title in December, one of the beaten Alianza Lima team could be excused for having mixed feelings.

With opportunities limited in the capital, Paolo Hurtado was loaned north to Aurich in 2009 and his time there left him with happy memories – “the dressing room was the most entertaining place I’ve been in my life,” he recalls. It also kick-started his career and he continued the momentum picked up at Aurich after his return to Alianza in 2010. The following year he established himself as one of the brightest young talents in Peru and made his international debut.

Nicknamed “Little Horse”, there is more to his game than merely speed and stamina – there is also evidence of thoroughbred ability. While having not yet acquired the same imposing physique, there are similarities with Manchester United and Ecuador winger Antonio Valencia. Versatile enough to play at right-back or in central midfield, he has shown his best form wide on the right for Alianza.

Running with the ball at pace, providing good service and cutting in to carry a goal threat, Hurtado’s club displays won him two caps in friendlies against Bolivia last September. He may not have seen action in the World Cup qualifiers yet, but his time will surely come.

Much depends, however, on where he goes next. He came through the club’s youth ranks, making his first-team debut in 2008. Four years on, several European clubs are circling and Alianza’s precarious financial situation may force a sale.

If so, Hurtado may regret not achieving his ambition of leaving the club as national champions. Sidelined by a knee injury in October, he was only fit enough to appear as a late substitute in the first leg of the Final against Juan Aurich. He started the return but was forced off before the end. In the decisive third game he was
back to his best and was a strong candidate for man of the match.

Aurich may have won the title but Hurtado could at least feel in his loan spell he had played a small part in their rise. Now the “Little Horse” could well be involved in a higher-grade race.