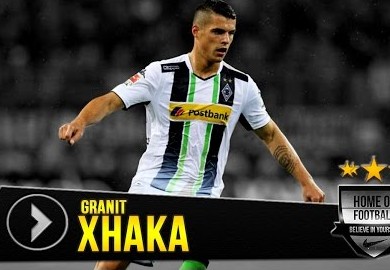 German newspaper outlet Bild have said that Swiss star Granit Xhaka will move to Arsenal in the summer transfer window for a fee of £35m.

Re Xhaka to Arsenal
Nothing new in the German media.
Looks like he could be moving. Arsenal have talked to his family. Has a buy-out-clause

With the Gunners looking set to lose veteran midfielders, Mikel Arteta, Tomas Rosicky, and Mathieu Flamini in the summer, Xhaka would represent a major coup.

He would add a combative edge to Arsenal’s midfield as well as fitting the hallmarks of a Wenger-type player; passing the ball comfortably and recycling possession effectively.

Xhaka was previously linked with a move to the Emirates, and in January, the Swiss midfielder joked that he had eyed Gunners midfield Francis Coquelin’s shirt number should a move to North London materialise.

Speaking in January Xhaka said: “I would also like to wear it [Coquelin’s shirt number] in the future. It was also here in Gladbach, with Amin Younes. And at Arsenal Coquelin has it. I’ve spoken with him, he would like to take another number!”

Xhaka has not shied away from the fact he would like to play in England one day.

He said: “I have a childhood dream that is the Premier League, whether I play two or a hundred games in England, I would like to eventually make this childhood dream come true.”

Borussia Monchengladbach Sporting director Max Eberl also suggested in January that Xhaka could depart the club at the end of the season:

“We have lost players like Reus and ter Stegen, Kruse and Kramer. In the summer perhaps Granit Xhaka will go.”