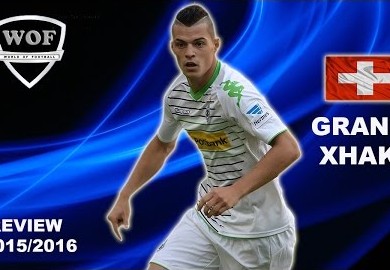 Swiss star Granit Xhaka has hinted a potential move to England and has joked that he would love to take Arsenal player Francis Coquelin’s shirt should he move to the Emirates.

The Switzerland internationals stock is rapidly rising as he is producing a number a eye-catching displays for club and country. As a result, a host of top clubs in England are reportedly interested in Xhaka.

Interestingly it appears Xhaka is interested in Coquelin’s shirt number and has set his sights on in the future.

“That was my first professional number at Basel. It’s even tattooed on my back,” Xhaka said.

He joked: “I would also like to wear it in the future. It was also here in Gladbach, with Amin Younes. And at Arsenal Coquelin has it. I’ve spoken with him, he would like to take another number!”

Borussia Monchengladbach are currently fourth in the German Bundesliga and have said that Xhaka would command a fee of around £37m. Sporting director Max Eberl has suggested that Granit Xhaka could depart the club at the end of the season.

"No matter if I play a second or 100 matches in England, I would one day love to fulfil that childhood dream" Granit Xhaka

He said to Sport Bild: “We have lost players like Reus and ter Stegen, Kruse and Kramer. In the summer perhaps Granit Xhaka will go.”

Xhaka is an accomplished central midfielder, who can pass comfortably and recycles possession effectively. He said that it is his dream to one day play in the Premier League.

“I have a childhood dream, that is the Premier League,” Xhaka said.

“Whether I play two or a hundred games in England, I would like to eventually make this childhood dream come true.”