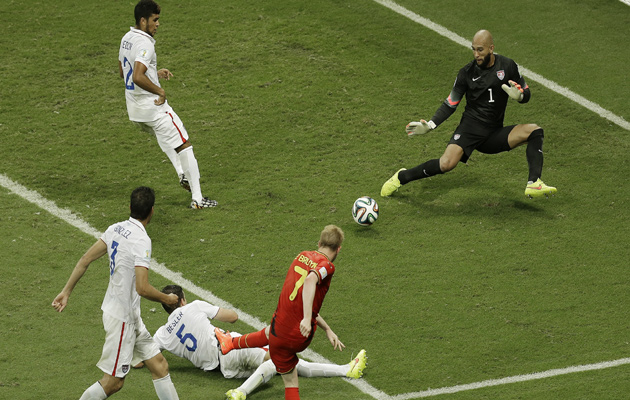 Match overview: Despite winning all three of their group games, Belgium have only lead for 24 minutes in this competition. Belgium conceded the joint-fewest goals in the group stage, along with Costa Rica and Mexico (1 each). This was a penalty against Algeria. USA fired the fewest shots on target in the group stage amongst the 16 teams that reached the second round.

Key moment: The arrival of Romelu Lukaku confirmed that Belgium had strength in depth. Showing pace, power, but above all freshness, Lukaku created the first goal and scored the second in an impressive 30 minute cameo. He and fellow substitute Kevin Mirallas offered a potency from the bench that the United States, for all their endeavour, could not match.

Man of the match: Tim Howard. Pulled off a record number of saves for a goalkeeper in this tournament. Howard almost singledhandedly kept Belgium at bay with a string of stunning stops. Without him in goal, the United States would not have held on until extra time.

Matter of fact: United States made 70 clearances tonight, more than any side has managed in a single World Cup 2014 game. Tim Howard made 16 saves, another record for Brazil 2014.

Talking point: If football does not take off in the United States after this match, it is unlikely it ever will. Jurgen Klinsmann’s side were outclassed at times, but they showed endless reserves of character to take the match into extra time and push a very good Belgium team to the limit. A defeat on the pitch it may have been, but football must surely have established a foothold in the American consciousness after this game.