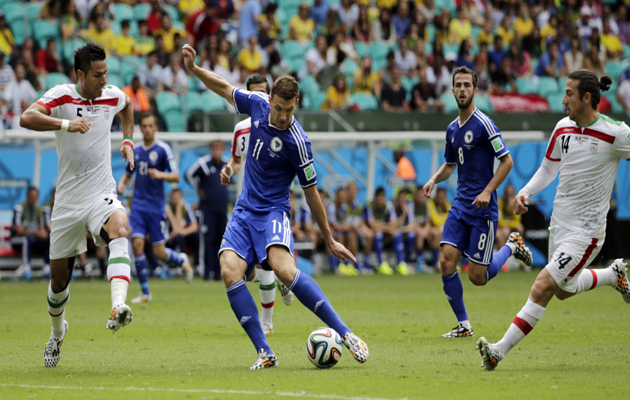 Match overview: The Bosnians have only pride left to play for, while Iran will qualify if they win today and Nigeria lose to Argentina (by 2 goals, or without scoring more than Iran). If Iran win by 2 goals, any kind of Nigeria defeat will be enough to see them through.

Key moment: Moments after Bosnia took the lead, Masoud Shojaei struck the bar for Iran. A few inches lower and this might have been a different game.

Man of the match: Edin Dzeko. The focal point of Bosnia’s attack, the talismanic striker opened the scoring with a wonderfully-placed left foot strike and set up the second with a slide rule pass to Miralem Pjanic.

Matter of fact: Reza Ghoochannejhad’s 79th minute goal for Iran meant that every single one of the 32 countries at Brazil 2014 had scored a goal.

Talking point: Bosnia will rue the late goal that was wrongly ruled out for offside in their previous match against Nigeria. Had that stood, they would have gone through on goal difference at the expense of the African side. Iran, who came into this match with the possibility of reaching the last 16 for the first time in their history, seemed weighed down by the burden of expectation.