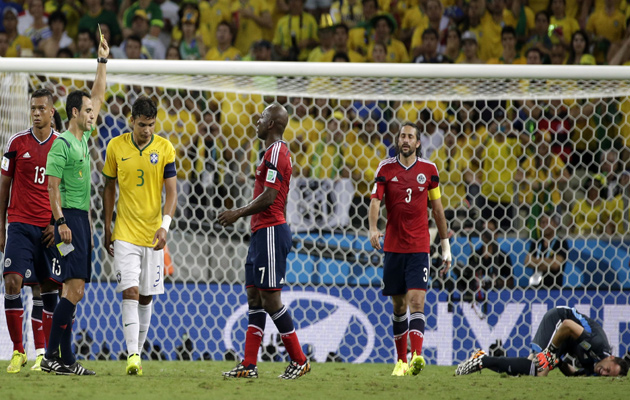 Brazilian football bosses have requested that FIFA wipe out the yellow card shown to captain Thiago Silva and thus erase the suspension keeping him out of Tuesday’s World Cup semi-final against Germany here.

The plea followed Brazil’s 2-1 win over Colombia in Friday’s rugged quarter-final in Fortaleza.

The match, leniently officiated by Spanish referee Carlos Velasco, contained 54 fouls, more than in any other match at the finals. Some 31 of those were committed by Brazil. They included the needless charge into Colombian goalkeeper David Ospina which earned Thiago Silva his second yellow card of the tournament.

A submission on his behalf to the world federation’s disciplinary committee from the Brazilian confederation has also demanded punishment for Camilo Zuniga, the Colombian who battered Neymar out of the rest of the tournament.

A FIFA spokesperson confirmed today: “The FIFA disciplinary committee is analysing all material and match reports and the submissions.” She confirmed that the CBF submissions concerned both Silva and Zuniga.

For coach Luiz Felipe Scolari and his technical staff, Thiago Silva is as important to the team as Neymar for his command both as captain and in the centre of defence. FIFA’s disciplinary committe does have the right to cancel a yellow card if deemed appropriate at the request of a federation.

However, on Friday night the foul which seized greatest attention was Zuniga’s knee-first blunder into Neymar in the second half. The hosts’ attacking inspiration was carried off with a cracked vertebra which will take between four and six weeks to heal.

Neymar was flown back to Brazil’s training centre at Teresopolis outside Rio de Janeiro on Saturday in an air ambulance with state President Dilma Rousseff leading expressions of concern.