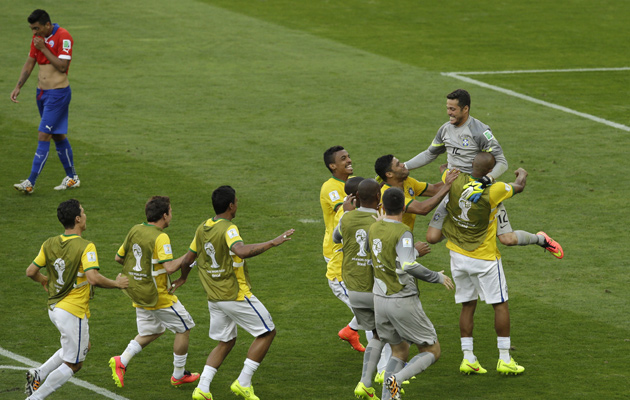 Brazil won 3-2 after a penalty shootout.

Match overview: Brazil have won all three previous World Cup fixtures against Chile, all of which have been in the knockout stages of the tournament (Round 2 in 2010, Round 2 in 1998, and the semi final in 1962). Chile have never beaten Brazil on Brazilian soil, losing 20 and drawing six.

Key moment: Howard Webb disallowed what looked a perfectly good goal by Hulk. However, the referee, acting on the advice of his linesman, was vindicated by television replays which showed the striker had controlled the ball with his upper arm before netting.

Man of the match: Julio Cesar. Produced one of the saves of the tournament to deny Chile in the second half and his two saves in the penalty shootout were instrumental in Brazil’s success.

Matter of fact: Brazil achieved their worst pass completion (68%) at a World Cup match since 1966.

Talking point: Brazil have relied heavily on Neymar thus far, but against Chile the forward was largely anonymous. Without him, and despite the efforts of the willing Hulk, Brazil look toothless in attack. The side’s continued reliance on the 22-year-old will be a concern for coach Luiz Felipe Scolari.