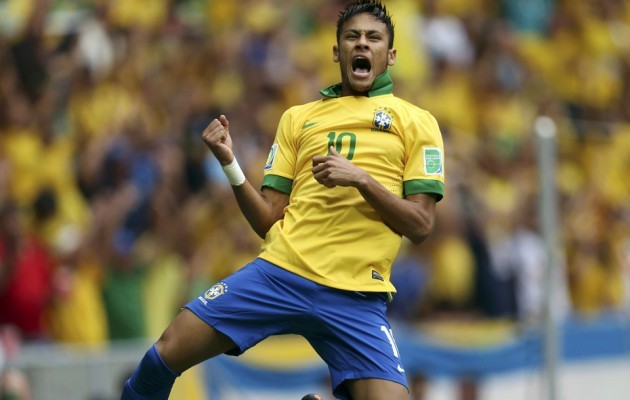 Croatia have never beaten Brazil. Looking at the odds for the World Cup opener (Brazil are 1-3 to win, Croatia 11-1), no one is expecting Niko Kovac’s side to break that duck in Sao Paulo tonight.

Brazil, inevitably perhaps, are favourites to win the trophy and with the five-time winners led by the experienced Luiz Felipe Scolari, the man who guided them to their last success in 2002, playing on home soil, it is easy to see why the bookmakers are not expecting an upset tonight.

Moreover, the host nation has never lost their opening World Cup game, with the 20 previous hosts winning 14 and drawing six of their openers.

So, no reason for Brazil to lack confidence and indeed on the eve of the tournament, Scolari boldly declared told his fellow countrymen that the World Cup trophy was theirs for the taking.

“To all Brazilians, I want to say that the time has arrived,” he stated. “This is our World Cup.”

“We have gone through difficult times together. But we know that life goes and each one has a path to follow. I find my strength form working with these players. Even when we are feeling sad we can forget the sadness and see the beauty around us.”

His confidence was echoed by star striker, Neymar, the man upon whose youthful shoulders the hopes of an entire nation rest.

“As Mr Scolari said, the time has arrived,” the 22-year-old said. “All Brazilians, the whole world is waiting for this moment.

“I thank God for everything he has given me and the honour of working with Mr Scolari. I always saw him as a winner. I always try to get as much as I can out of his experience.

“I hope I can get his winning streak and we will win this World Cup.

“I am anxious but I am also extremely happy because many people would like to be here. I hope we can help fulfil the dream of our nation, which is to win the World Cup.”

Ironically, that dream, and how Brazil cope with the huge weight of expectation of a home victory, will ultimately determine not only tonight’s game, but possibly the outcome of the tournament itself.

For Croatia, coach Kovac is confident that his players can cause an upset against the host nation.

“We know how to stop Neymar and Brazil,” he told reporters. “Brazil is not only Neymar – they have a great team, but Croatia also have excellent players.

“I’ve had six months to study their national team … for us to come up with an answer to Neymar. He’s one of the top three players in the world but we know what awaits us.

“I’m not losing any sleep over it.”

Kovac, who took over from the sacked Igor Stimac for Croatia’s play-off against Iceland, knows that trying to park the bus against Brazil would be a recipe for disaster.

“We will try to keep the ball as long as possible but create chances whenever possible, we are not going to park the bus tomorrow,” he said.

“We are going to attack … because Brazil is so strong that if you want to succeed against them you have to score.

For Brazil, Neymar has recovered from a knock picked up in training and is likely to start on the left in Scolari’s favoured 4-2-3-1 formation with Hulk on the opposite side and Fred playing as a lone central striker.

Scolari is set to keep faith with Chelsea playmaker Oscar in the No 10 playmaker position, although his club teammate Willian is an option.

Croatia will be without their most reliable forward, Mario Mandzukic, who is suspended following his red card in the play-off game against Iceland in November.

That means that Eduardo is likely to lead their attack against the country of his birth – with
the striker recently admitting he might sing both national anthems.

The pieces in Brazil’s jigsaw started to come together when Luiz Gustavo was installed as the holding midfielder. It balanced out the side and stemmed the flow of goals being conceded from the space in front of the centre-backs Thiago Silva and David Luiz. Gustavo’s presence also frees Paulinho to launch his well-timed forward runs. The fact that he is left-footed makes
it easier for him to protect the weaker side of the defence.

Another change down the spine of the team introduced by Scolari was the return of a target-man centre-forward. Fred provides a reference point for a quick, dynamic midfield and his prowess with his back to goal helps bring Neymar into the game.

The line of three behind Fred shows considerable mobility, with Neymar on the left usually the furthest forward. The all-round ability of Oscar enables him to drop deep to orchestrate the play in addition to ghosting into the box, though there are doubts over whether he will be fresh enough after three intense years. The physical capacity of Hulk will see him bursting forward down the right flank. Hulk normally starts, but can be a useful impact sub.

Jo is an obvious direct alternative for Fred, while Willian can play across the attacking line. Hernanes could come in for Paulinho, while Fernandinho would be a slightly more defensive replacement.

There will be periods during matches where Scolari will seek to press the opposition high up the pitch, which is a relatively new concept for Brazil – and one which could add to the problems for referees. During the Confederations Cup the player who was most fouled was Neymar – a reflection both of his ability and of his capacity to draw challenges in areas from which his set-pieces can be so dangerous. But he – followed by Oscar – was also the player who committed most fouls as Brazil sought to stop their opponent’s counter-attacks at source. The officials will have lots of decisions to take, and with the home crowd howling for free-kicks, the pressure will be on.

Scolari’s principal tactical variation is to switch to 4-3-3, with Ramires coming in for Hulk. He will sit in alongside the two midfield holders, with Oscar and Neymar pushed up alongside Fred.

Defensive discipline and cunning counter-attacks are the Kovac way

Nico Kovac is a coach who seeks discipline above all else in a game and expects everyone to get behind the ball when possession is lost. He likes to play with two midfielders in front of a back four. Although one of those, Luka Modric, is a naturally attacking player he too is forced to sacrifice much of his creativity for defensive responsibilities. Kovac will probably pair him with Ivan Rakitic. Mateo Kovacic would only play in tandem with Modric if an all-out attacking system is called for.

Left-back is a major problem for Kovac. Danijel Pranjic will probably be picked ahead of Ivan Strinic, who is better going forward than defending.

Croatia will hope to expose opponents on the counter-attack and feed Ivica Olic and Mario Mandzukic, but this has to be done at speed. The more they push forward and commit players to joining the attack, the more vulnerable they become at the back.

With his flair for taking chances, mobility, cunning movement and vast international know-how, Eduardo is the ideal impact sub.

When a situation occurs that they need to chase the game the system turns into a 4-4-2, with Srna probably moving from right-back to right midfield, with Domagoj Vida taking his place. A second attacker, usually Olic, is then pushed up alongside Mandzukic. Nikica Jelavic, strong in the air and physically robust, offers an alternative.

Another option that Kovac may explore to protect his backline is fielding three central defenders and going 3-5-2.

Another way Croatia could force the issue, to take more of the initiative, would be for long-time Bundesliga professional Kovac to adopt a Bayern Munich-like 4-1-4-1, a system, of course, star striker Mandzukic knows all about. This would entail Ognjen Vukojevic guarding the back-door; Perisic working the right-flank; Modric and Rakitic pulling the strings in a much more advanced position and Olic buzzing down the right.

Given the crossing ability in the side and the aerial threat posed by Mandzukic and Jelavic, the Croats would be more direct as they chased the game.