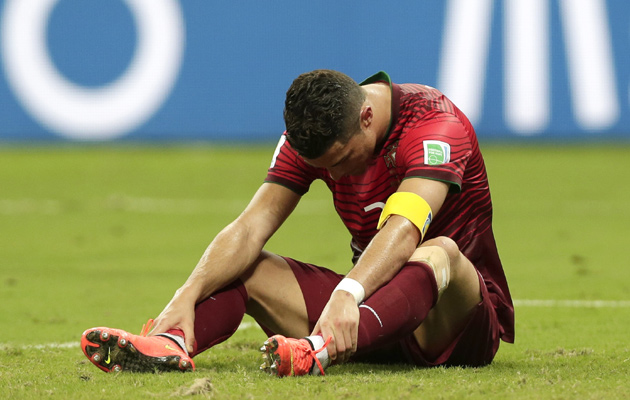 Madrid defeated neighbours Atletico in Lisbon a month ago to win the Champions League Final for the first time in 12 years. This was the club’s record-extending 10th triumph since the original European Cup was launched in the mid-1950s.

The effort in Lisbon, both mentally and physically, was immense. On top of all that, Spain’s La Liga is also the latest-finishing of western Europe’s major leagues.

Perhaps it was no coincidence that Iker Casillas and Sergio Ramos were far below their usual high standards here in Brazil; indeed, Spain skipper Casillas was centrally at fault in the defeats by both Holland and Chile.

Leading marksman in the Champions League last season with 17 goals and joint top scorer in the European leagues with 31 goals (along with Liverpool’s Luis Suarez) was Cristiano Ronaldo. Yet Ronaldo ended the season injured and at half pace in the Champions League showdown and was clearly still fragile and damaged at the World Cup.

Lacking his usual passion, trickery and goals Portugal are doomed to first-round elimination.

Ronaldo did manage the superb right-wing cross from which Silvestre Varela dive-headed Portugal’s stoppage-time equaliser in their 2-2 draw with the United States. But clearly he needed rest, if not surgery, and his presence in Portugal’s academic last game against Ghana is unlikely.

Initially it appeared, against the US, that Portugal had surmounted the problems created by injuries plus the suspension of centre-back Pepe. Nani put them ahead from close range. But Team USA charged back into the fray and went ahead with second-half goals from Jermaine Jones and Clint Dempsey.

Varela’s headed equaliser could not lift Portugal off the foot of the Group B table. Germany and the US are favourites to progress.