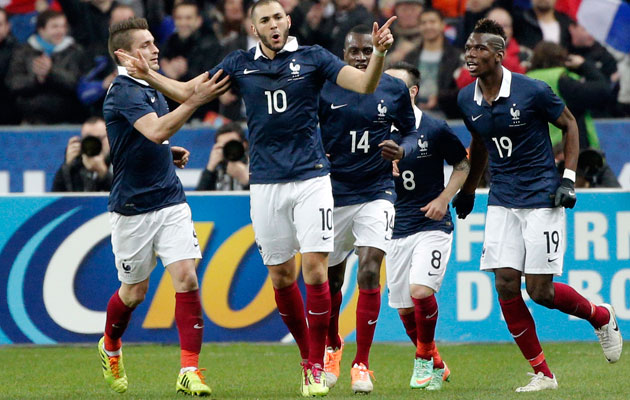 Prior to the qualifying play-offs Deschamps favoured a 4-2-3-1 system with Paul Pogba and Blaise Matuidi providing blanket cover in front of the back four and Olivier Giroud or Karim Benzema leading the line alone.

Needing an emphatic home victory to qualify in the second leg against Ukraine, the coach went for a more adventurous 4-3-3, adding Yohan Cabaye for extra midfield muscle and pushing Franck Ribery into a more forward role alongside Mathieu Valbuena and Benzema. The  tactic worked like a charm and the French showed themselves capable of dealing with  a pressure situation, while embracing some tactical tinkering.

However, without the injured Ribery, France lose arguably their most potent attacking player. In the absence of the playmaker, there is no obvious like-for-like replacement, so the onus will fall upon a combination of Benzema, Giroud and Valbuena to fill the creative void.

In a qualifying group that looks eminently winnable, Deschamps may go for the jugular from the off, potentially bringing in the adaptable Antoine Griezmann to offer  a number of interesting attacking permutations.

France’s starting XI looks solid and capable of going well. Hugo Lloris will let  no one down between the posts, a back four of Mathieu Debuchy, Raphael Varane, Eliaquim Mangala and Lucas Digne is certainly exciting, but perhaps lacks a leader, so Patrice Evra may be the answer there. With Pogba and Matuidi sure to start, it looks like Deschamps will opt for Cabaye to add midfield balance, while the hard working Griezmann and Benzema give France the capability to snuff out opposition attacks and yet still break quickly and in numbers.

Deschamps’ big problem may be the lack of real game-changing quality on the bench  if his Plan A is going flat. Are Moussa Sissoko, Dmitri Payet or Valbuena going to unduly worry opponents? With the possible exception of Loic Remy, France look a little undercooked where fringe players are concerned. And what if Benzema gets injured?

The option if France find themselves chasing the game in Brazil would be to move to a traditional 4-4-2 system with two out-and-out strikers. Deschamps has been reluctant to take this step to date, but the idea of Benzema being partnered by Giroud or possibly Remy at the expense of a central midfield player is one that could appeal if Les Bleus need a goal quickly.

Luis Fernando Suarez usually deploys a basic 4-4-2 in which the most important thing is defensive organisation. The two central midfielder spots are usually taken by defensive-minded players, Wilson Palacios, who stays deep and Roger Espinozawho plays box-to-box but prioritises ball recovery rather than generation of offensive play.

The team relies on fast wingers to feed crosses to the tall, powerful strikers, usually Jerry Bengtson and Carlo Costly, who scored 8 of the 13 Honduran goals during the qualifiers.

The big decision for Suarez is whether to play one or two wingers. He has Mario Martinez on the left and Oscar Garcia on the right, while Andy Najar has featured on either flank. In the qualifiers, two wingers featured against lesser opponents, but at the World Cup, against more accomplished opponents, it is more likely that Garcia will feature on the right, but that Espinoza will switch to the left, with Luis Garrido coming in to defensive midfield.

There seemed to be no other options up front but the emergence of youngster Jonathan Mejia, currently on the fringes of the squad, could provide the team with a powerful option up front if he finally makes the cut.

At the back, the team relies on the physicality of Maynor Figueroa, who plays centre back for Honduras, and Victor Bernardez, while Noel Valladares provides experience and sobriety in goal.

Down the sides, Emilio Izaguirre is usually the more entrepreneurial one down the left while Brayan Beckeles or Arnold Peralta stay further back on the right.

In qualifying, Suarez played with a single striker, usually Costly, on a number of occasions. This strategy could take a number of forms. In a 4-1-4-1, Garrido plays the midfield holding role, allowing Garcia and Najar to attack on the flanks. In a 4-4-1-1, Garcia switches to a second striker role behind Costly, with Najar moving to the right and Espinoza on the left.

Roger Rojas has also performed the lone striker role, though he can also play behind the main man.