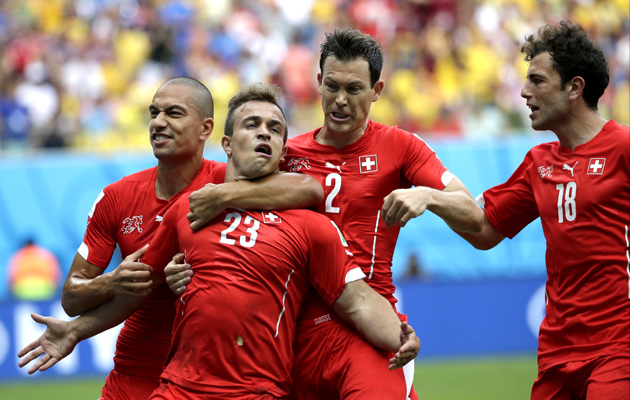 Match overview: Switzerland conceded as many goals (5)  in their last match against France as they had shipped in their previous nine World Cup matches put together. Honduras have now played eight games without a win at the World Cup (D3 L5). They have played more matches at the World Cup without winning than any other side.

Key moment: Switzerland’s opening goal, a long range effort from Xherdan Shaqiri, set Ottmar Hitzfeld’s team on their way to a comfortable win and a place in the knockout stages.

Man of the match: Xherdan Shaqiri. The playmaker had been quiet in Switzerland’s first two games, but in Manaus he was outstanding, scoring three goals and prompting most of his side’s attacking moments.

Matter of fact: Xherdan Shaqiri’s hat-trick is the 50th in World Cup history.

Talking point: Four years ago, Switzerland opened their campaign with a memorable victory over the eventual winners Spain. However, a lack of firepower ultimately cost them and they went out of the competition on goal difference. This time round, seven goals in three games, confirms that they are a much more potent attacking side. They face a tough second round assignment against Argentina but with Xherdan Shaqiri in this kind of form, they are not without hope.