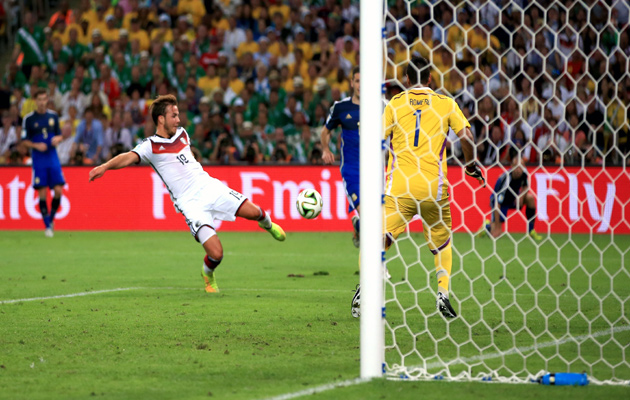 Certainly a tournament of better quality than in South Africa, but still cursed by its unwieldy size.

Sixteen teams, the original complement though in Brazil in 1950 only 13 were prepared to turn up, always seemed to me an ideal number. The ineffable Joao Havelange, who had favours to return, bloated the number to a mathematically lop sided 24.

Blatter The Bloater increased it in his turn to 32. Far too many teams, far too many matches. No wonder even an undoubted star like Lionel Messi looked weary by the end.

That it was a highly dramatic tournament is beyond dispute. The astonishing collapse of Brazil. The outrageous behaviour of Luis Suarez. The destruction in their very first group game of Spain by an initially unfancied Holland. The emergence of a major new talent in Colombia’s James Rodriguez. The splendid prowess of little Costa Rica. The gloriously spectacular goal whereby Germany won the Final in a game which seemed doomed like all too many to slide into extra time and the looming irrelevance of penalties.

Brazil’s 7-1 thrashing by Germany in Belo Horizonte will remain a astonishing milestone in the history of football. 7-1; and on Brazilian soil!

To be followed in due course by the lesser but undoubted humiliation of a crushing 3-0 defeat by a Sneider-less Holland in the third place match.

Those ten deeply embarrassing goals told us that Brazil no longer seem to know how to defend. And while for years they have done without wingers, relying on overlapping full backs who in this context left all too many gaps when they attacked, now they appear devoid of centre forwards. Poor Fred, so patently inadequate, was cruelly jeered when substituted even by his own supporters. Jo was a flaccid deputy.

Neymar was fortunate not to be sent off in Brazil’s opening game against Croatia, which might well given his essential role have meant his team falling at the first hurdle.

The shocking, unpunished foul which could easily have crippled him, committed by Colombia’s Juan Zuniga, was indirectly the consequence of the inept performance by a Spanish referee who let foul after foul go by without a yellow card till deep into the second half.

As for that shambles of a Brazilian defence, Scolari was surely dicing with death when he put the ever-irresponsible David Luiz there, with his daft sorties upfield. Not to mention the crass header back into his own box which gave the Dutch a goal in the third place match.

I suppose we should remember that Brazil have had centre forward problems in a past World Cup, in 1982 when the inelegant Serginho was subjected to some caustic criticism. But so splendid was the midfield behind him with Socrates, Falcao and co that it didn’t too much matter.

Germany certainly deserved their success, but they could well have gone down to Ghana and the brilliance of their World Cup winning goal against Argentina was the work of two fine substitutes, Schurrle and Goetze, who should have been on the field long before.

When the excellent Khedira dropped out before the kick off, it made scant sense for manager Low to replace him with the largely untried Christoph Kramer. Nor did the initial choice of the 36-year-old Miroslav Klose, still a useful spearhead but inevitably short of pace and movement, make much sense.

England? Hard to see who could now replace Roy Hodgson whose team inundated with ferocious criticism, after all went down twice by only 2-1. Roy might well have been bolder, realising Steven Gerrard is past his meridian, giving Barkley more time, using Jack Wilshere, whether or not he smokes – a cardinal sin? –  against Uruguay. Who else can pass the ball?

With hindsight Ashley Cole could have gone; when Baines faltered, brining on the teenaged Shaw became a gamble. And Roy can hardly be blamed for the paucity of centre backs. Terry? Still the best, but even he struggled in South Africa.