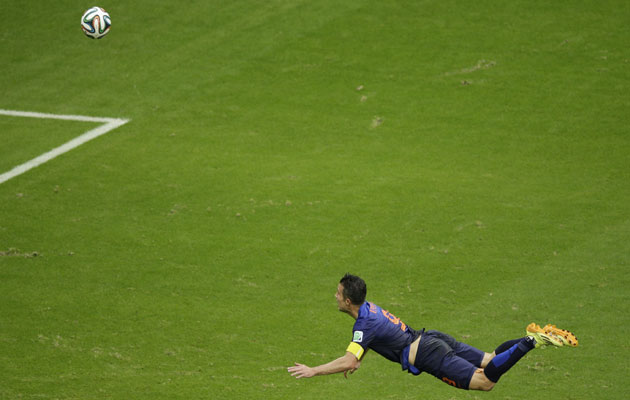 Match overview: Wesley Sneijder was making his 100th appearance for Holland. Spain had won six matches in a row at the World Cup and had not conceded a goal in the process.

Key moment: A wonderfully disguised pass by Andres Iniesta set David Silva through on goal. But the Manchester City man tried to be too cute with his finish and Jasper Cillessen was able to palm his effort wide. Had that gone in Spain would have been 2-0 up and seemingly in control. Moments later Holland were level via Robin Van Persie’s wonderful diving header. On such small margins…

Man of the match: Arjen Robben. There were several contenders within the Dutch side, most notably Van Persie and the enterprising Daley Blind, but Robben terrorised the Spanish defence and but for a wonderful stop by Casillas, could have finished the game with a well deserved hat-trick.

Matter of fact: This was the first time Spain had conceded 5 goals in an international match since losing 6-2 to Scotland in June 1963.

Talking point: Inevitably, given the scale and the manner of Spain’s loss, this defeat will be interpreted as an end of an era defeat. Coach Vicente del Bosque has just four days in which to exorcise the humiliation. Unfortunately, next up are Chile – everyone’s favourite dark horses. Meanwhile, Holland, who came here with low expectations, can now dream of a place in the knockout stages.