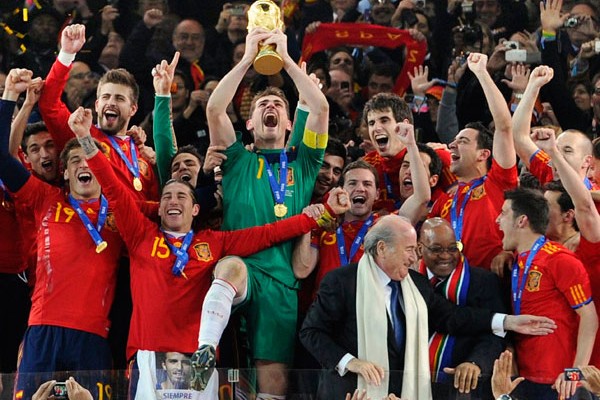 Holders Spain start their defence of the World Cup against the Netherlands at the Arena Fonte Nova in a repeat of the 2010 final.

No European side has won a World Cup in South America and some critics have suggested Spain, four years on from that triumph in South Africa are a team in decline.

Inevitably, coach Vicente Del Bosque disagreed with that theory, saying: “We have a mature team and young players. We are not afraid of anything and we are in our prime.

“I don’t have any fear for the future either because we have an Under-21 team that are winning things and there are plenty of replacements that will ensure a bright future.”

“We cannot say it is a veterans’ squad. It is mature, a squad with depth, we have a few young players and a few who are 30 and a little over 30.”

There is certainly plenty of experience in the squad with several players in their 30s, including key figures such as Xavi, Xabi Alonso, Andres Iniesta and Iker Casillas.

The hunger remains as confirmed by Koke, who is set for his first major tournament, and believes the team are as ambitious as ever.

“Spain always have a winning mentality,” the Atlético Madrid player said. “We have kept the same philosophy, which is to go out and play with the same style that has characterised us for so many years – that’s how this group became winners.”

Spain have won their last six World Cup games, their best ever run in the tournament, while Del Bosque has only lost one of his 25 World Cup games as Spain head-coach, including qualifiers (W22 D2). It is a formidable record and when allied to their Euro 2012 triumph two years ago, it would be premature to write off Spain’s chances this time around.

As for Holland, they will look back on 2010 with mixed feelings. Reaching the final was quite an achievement, but in so doing, they abandoned many of the attacking traits that have characterised Dutch football over the last 40 years. And their thuggish approach in the final will have lost them a number of admirers.

“Football can be a physical struggle, the referee is there to point out what the limits are,” he argued. “Personally I do not believe the Dutch crossed the line in 2010. If you have a different opinion then it is a shame.”

Under Van Gaal, Holland have been accused of abandoning ‘total football’, although they were the first team to qualify for Brazil 2014 and after a dismal Euro 2012 there has been a return of the swagger under his guidance.

New man Diego Costa is set to be available after declaring himself fit and fully recovered from the hamstring injury which dogged him in the final weeks of the season.

Van Gaal also has a concern over his star striker, Robin van Persie, but is confident the Manchester United man will be fit to lead his side’s attack – despite being withdrawn at half-time in the recent friendly win over Wales after complaining of a groin injury.

Few national teams have a tactical or footballing identity as clear as Spain. “Tiki-taka” will once again be the approach, with Vicente del Bosque admitting in the midst of debates about Spain being “boring” at Euro2012 that he prefers not to allow the other team the ball to attack them. Spain’s style has an aesthetic quality as well as a practical one. It is about control as much as it is about creation.

Spain’s style is of course similar to that employed by Barcelona but la seleccion’s version is reinforced with two deep midfielders not just one: Sergio Busquets and Xabi Alonso will play together. In front of them, the wealth of technical midfielders is astonishing: Xavi, Santi Cazorla, David Silva, Juan Mata, Pedro…

Increasingly, Spain have found that teams close up against them, defending very deep and looking to launch the very occasional counter-attack. The challenge then has been to find a way to change the game and open up spaces. Del Bosque’s preferred option from the bench is usually Jesus Navas. Meanwhile, from set plays both Sergio Ramos and Gerard Pique are dangerous.

At the World Cup, Fernando Llorente was also used to great effect against Portugal, pushing them back and offering Spain a target, but it is not clear whether he will go to Brazil and the striking position has caused the greatest doubts – not least because Spain’s style makes it so hard for the no.9, denying him space in which to play. Llorente, Fernando Torres, Roberto Soldado, Alvaro Negredo, David Villa, and Michu have all been tried there and Spain have now “signed” Diego Costa.

Some hope Costa will provide the bite and nastiness that Spain need and he has been arguably La Liga’s outstanding player this season, but he too will find the space in which he is so lethal denied to him, as he saw in his debut against Italy.

An obvious switch would be to adopt a false no.9 again, just as they did at Euro 2012, when Cesc Fabregas played in the Final and created the first in a 4-0 win. Winger Navas is also a key second-half change if Spain need to stretch the game.

Holland abandoned a traditional 4-3-3 system in favour of a 5-3-2 (or 3-5-2) system, but it is uncertain which players will be included in Van Gaal’s starting line-up, particularly in goal and midfield where he has several options and problems.

Ideally the coach would like to pick Kenneth Vermeer as his keeper, but as only a reserve at Ajax these days his lack of match practice would suggest that team-mate Jasper Cillessen will probably be first choice.

Ever since his days in charge at Ajax, Van Gaal prefers multifunctional players who can build attacks and are masters of the passing game. And it is also no surprise that he is keeping an eye on players coming through the youth ranks of the Dutch clubs and the defence options include promising youngsters such as Daryl Janmaat, Joel Veltman, Daley Blind and Bruno Martins Indi.

The absence of the injured Kevin Strootman is a major blow since Van Gaal has no decent replacement. It could also have consequences for the slowing Wesley Sneijder as the Roma midfielder was covering a lot of ground for him. Normally Van Gaal would opt for one defensive midfielder but he could now switch to
two in big games.

Although Van Gaal is known for his wilfulness he must have noticed that he needs powerhouses in midfield to prevent his team being blown away. Characters like Nigel De Jong and Leroy Fer would be suitable. However, his favourite is Blind, although placing his assistant’s son in midfield would leave a gap at left-back with the coach not convinced about his back-up options.

Up front, Robin Van Persie and Arjen Robben are definite starters and much will depend on their form and fitness if Holland are to play a decisive part in this World Cup. Jeremain Lens will probably also get a place, with Memphis Depay as a replacement on either flank.

Van Gaal never varies from the 4-3-3 template, but he could opt for two defensive midfielders against stronger opponents. Fer would come in for Sneijder in this scenario.

The hard-running Dirk Kuyt would also offer an alternative to Robben up front, Klaas-Jan Huntelaar a replacement for
Van Persie.