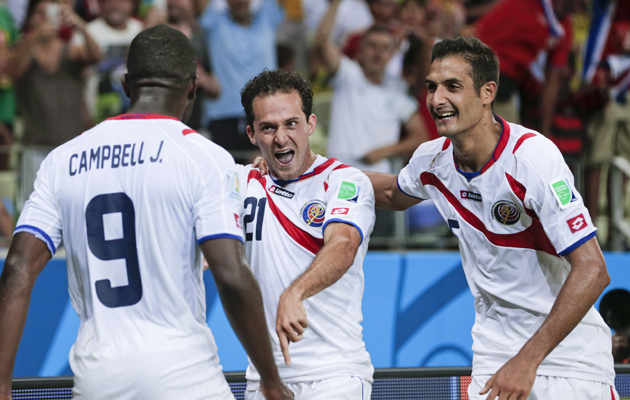 Match overview: Costa Rica have lost all three of their previous World Cup meetings with South American nations. They were beaten 3-0 by Ecuador in 2006, 5-2 to Brazil in 2002 and 1-0 to Brazil in 1990. Uruguay head coach Óscar Tabárez is the longest-serving coach at the 2014 World Cup, taking charge of his nation back in 2006.

Key moment: Joel Campbell’s equaliser brought parity in terms of the scoreline, but also injected much needed belief into the Costa Rica team. Thereafter, there was only going to be one winner.

Man of the match: Joel Campbell. Even before he levelled the scores Campbell was the most inventive player on the pitch. Took his goal well and played a beautifully weighted pass for Costa Rica’s third.

Matter of fact: This was the first time Costa Rica had scored more than two goals in a match at the World Cup. Pereira becomes the first player to be sent off at the 2014 World Cup and the 9th Uruguayan in the history of the tournament.

Talking point: Costa Rica the so-called whipping boys of Group D, sprung a huge shock with this performance. Uruguay, without Luis Suarez, look a very ordinary side. The fact that Oscar Tabarez was not prepared to risk his star striker in the closing stages of this game raises questions about his overall fitness.