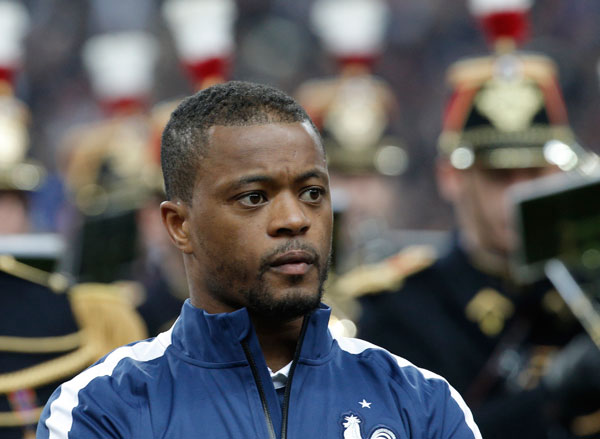 Relentlessly pilloried by the the French media for his leading role in the national team’s strike at the last World Cup, widely thought to be unworthy of an automatic place in the starting line-up and criticised for selfish behaviour off the pitch, the veteran ‘Triciolore’ left-back might bristle with anger and resentment at every slight directed at him, but certainly has no intention of walking away from the firing line just yet.

His pride hurt by France’s disastrous displays at Euro 2008 and South Africa 2010, the 33-year-old is determined to be part of a Gallic renaissance, to end a decade in ‘bleu’ on a high.

“I’m a winner,” said Evra in an interview with Radio Monte Carlo in February.

“I’m tired of hearing people in England describe our French team as poor. It hurts me.  I intend to have a ball at this World Cup, to make the most of every moment, help my teammates do their best and be effective for my country. I’ve a rage in me to do well. “

While no longer France’s captain, he remains the guy to rally the troops, leaping onto his soapbox for a half-time pep-talk in the World Cup qualifying victory in Belarus last September. 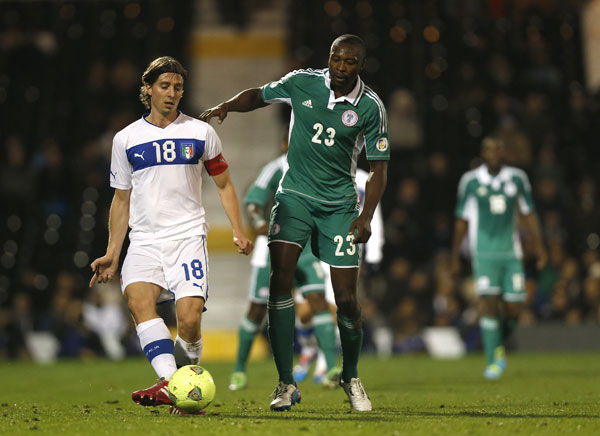 After almost two decades of loyal, unstinting service for Newcastle United, the tall, gangling 32-year-old striker is on the verge of the ultimate last-hurrah reward.

Forget the testimonial, a present from the boardroom or a round of applause at his beloved St James Park. What he has in mind is far more valuable – a belated piece of the World Cup finals action with Nigeria.

Born in the northern Nigerian city of Zaria but brought up from the age of five in Newcastle, Ameobi went on to be a mainstay of the England Under 21 side – winning no fewer than 20 caps for the Young Three Lions between 2000 and 2003 – only for his international career to drain away, his hopes of full caps wrecked by injury problems and season upon season of playing second-fiddle to a succession of Newcastle centre forwards (Alan Shearer, Michael Owen, Andy Carroll and others).

The Nigerian federation, though, would have no such reservations and since making his debut for the Super Eagles in the autumn of 2012, he has very much looked the part, especially when brilliantly flicking in a goal in a 2-2 friendly draw against Italy in London last year. 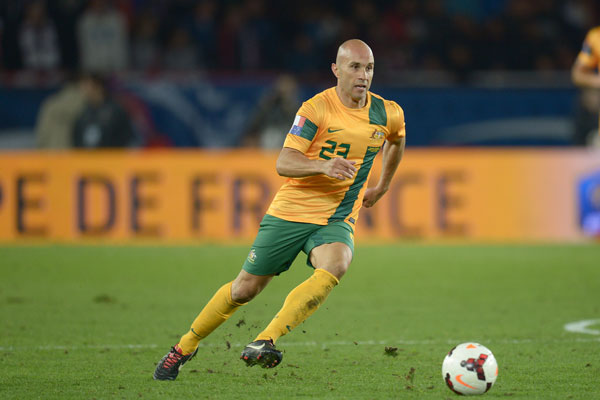 One of the rare sources of midfield guile, craft and invention available to Socceroo coach, Ange Postecoglou, the ex-Parma, Palermo and Lazio schemer will, if selected, be featuring in his third straight World Cup, but first must prove his match sharpness.

Back in November, he was handed a four-month ban by FIFA after irregularities emerged over his transfer from Dubai club Al-Nasr to Qatar’s Al-Gharafa in August 2012 and suddenly left competitively high and dry, has been training with A League side Melbourne Heart in a bid to stay fit.

Capped 73 times in Green and Gold since 2001, ‘Bresh’ admits the lay-off is ‘very frustrating’, but points out that he is no stranger to showpiece races against time.

“In the months leading up to South Africa 2010, I had major back problems and at one stage it was touch and go whether I would make it,” says the 33-year-old Victorian.

“I’m confident it will turn out as well this time. A case like this is almost unheard of and I think we’ve been hard done by. But you just have to get on with it and I can only thank Heart for all their support. They have even organised friendlies for me.” 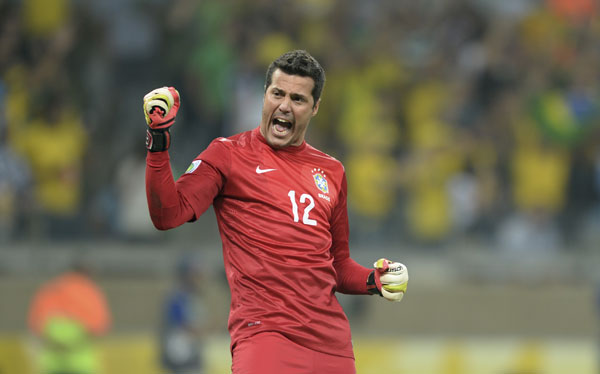 Following Queens Park Rangers’ relegation from the Premier League at the end of last season, it was widely-assumed their highly-rated Brazilian keeper would jump ship immediately, keen to do whatever it took to remain a regular top-flight performer and ‘Selecao’ first-choice.

So how surprising it was to see the highly-decorated custodian – a Champions League and Serie A winner with Internazionale – still at Loftus Road books when the August transfer window slammed shut, a second-rate state of affairs made even worse with QPR manager Harry Redknapp opting to pick England international Robert Green ahead of him.

With a World Cup on the horizon – and particularly one on home soil – six months on the sidelines was the last thing Cesar needed, but at least Cesar and his advisors have woken up now, securing a loan switch early this year to FC Toronto of the MLS.

Although Brazil’s number one by a country mile – Atletico Mineiro’s Victor and Jefferson of Botafogo are not in the same ball-park – Cesar simply cannot afford any further slip ups. Time to grab the moment.  Complacency, idleness and World Cups do not mix. 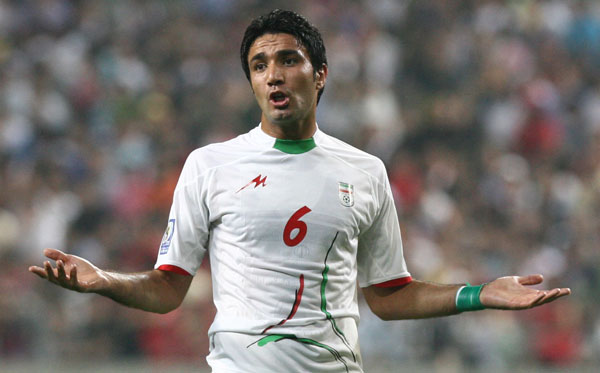 Iran’s long-serving skipper and defensive midfielder, some 14 years in the international saddle, aims to make some history when his side does battle with Argentina, Bosnia and Nigeria at this summer’s main event.

In Team Melli’s three previous World Cup appearances (1978, 1998 and 2006), not one of their skippers (among them heavyweights Ali Parvin and Ali Daei) has managed a goal and the 33-year-old Kuwait Sporting Club employee would dearly love to buck the trend.

It shouldn’t prove beyond him either. Boasting a strike-rate of 36 goals in 137 games for Iran – including five in the qualifiers for Brazil 2014 – the dynamic Nekounam has a clear liking for the big stage and with today’s Iran playing with far more dash and freedom than in the past, he should have more than enough the opportunities to unleash that forceful right-foot of his.

A popular figure at Spanish club  Osasuna for six seasons (2006-12) – earning himself the nickname of ‘Caviar’ – he is an emblematic figure in Iranian football, serious, authoritative and a man of conviction, even prepared to incur the wrath of the powers-that-be with his support for a moderate opposition candidate during the 2009 presidential elections. 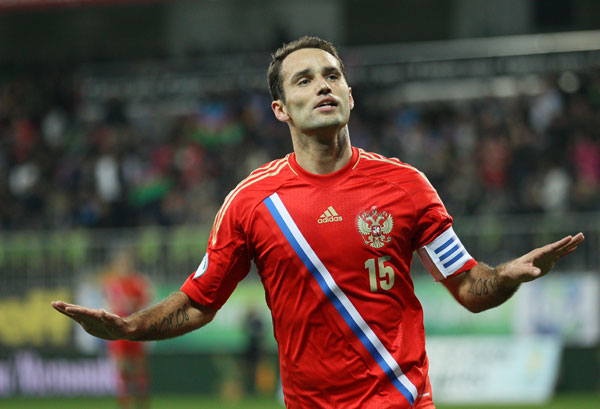 If his ever-controversial career is anything to go by, there is next to no possibility of Russia’s 33-year-old captain approaching what is likely to be his swan song tournament in cuddly, diplomatic vein.

Rebellious by nature, a brutally straight-talker and never happier when provoking a reaction, he is the antithesis of the old Soviet toe-the-line stereotype and whatever his team’s fortunes in Brazil, you can be sure the classy attacking midfielder will bring vivid colour and spice to proceedings.

Did arch-disciplinarian Russia coach, Fabio Capello really know what he was doing when giving Shirokov the armband last year? Although a wonderful player, graceful, technically-refined, intelligent and a past master at making late runs into the box, he is anything but a solid establishment figure and could be a time bomb waiting to explode.

Russia’s Player of the Year in 2012 and 2013, his recent loan switch from Zenit St Petersburg to Krasnodar is open to two contrasting explanations: his fractious relationship with the Zenit hierarchy and fans or the desire for a fresh challenge with one of the Russian elite’s most ambitious clubs.