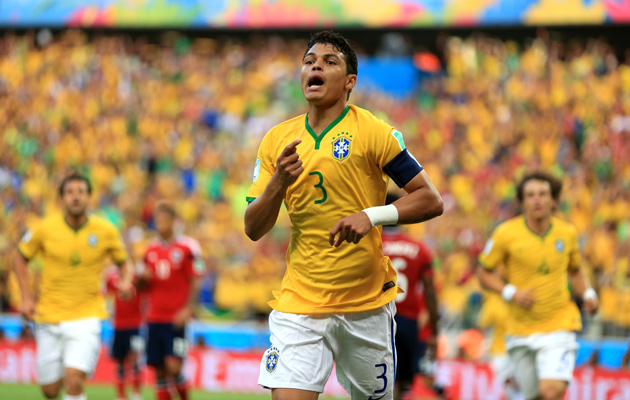 Brazil are through to the semi finals of the World Cup where they will meet Germany for a place in the final. This was not a vintage display from the hosts, who were hanging on at the end after James Rodriguez reduced the arrears with ten minutes remaining. But, it was a victory they just about deserved as once again, a Luiz Felipe Scolari side showed that they know how to win ugly.

James Rodriguez sends the keeper the wrong way and Colombia are back in the game.

Julio Cesar brings down Bacca and the referee points to the spot.

Brazil are awarded a hotly contested free-kick 30 yards and up steps David Luiz to place a stunning strike beyond the fingertips of Ospina. Tremendous strike, not exactly in keeping with the quality of the game as a whole.

A frenetic first half comes to a close with Brazil deservedly ahead through that early Thiago Silva goal. The pace has been frantic, the fouls plentiful, but the football though exciting, has not lived up to expectations.

Brazil have been buzzing since the goal and have come close to adding a second on a number of occasions. Hulk lashes in a low shot, which David Ospina does well to parry away

Brazil are ahead within 7 minutes and it’s a soft goal for Colombia to concede. Neymar swings in a corner and the unmarked Thiago Silva ghosts past the static Carlos Sanchez to convert from close range.

Paulinho comes in for the suspended Luiz Gustavo who was shown his second yellow card in the second-round match against Chile.

Germany have missed a glorious chance to put the match to bed but Hugo Lloris saved with his feet from Andre Schurrle after Thomas Muller had fluffed his chance with a airshot.

Germany ahead at the break. Mats Hummels has been the man of the half, scoring the opening goal and twice blocking France attacks in his own area. France have had chances, though. Karim Benzema should have hit the target in the eighth minutes, but sidefooted his volley wide, and Manuel Neuer saved brilliantly from Mathieu Valbuena.

Manuel Neuer pulls off a brilliant one-handed save to stop a Mathieu Valbuena volley. Then Paul Pogba puts a header over from the resulting corner. Good spell for France. 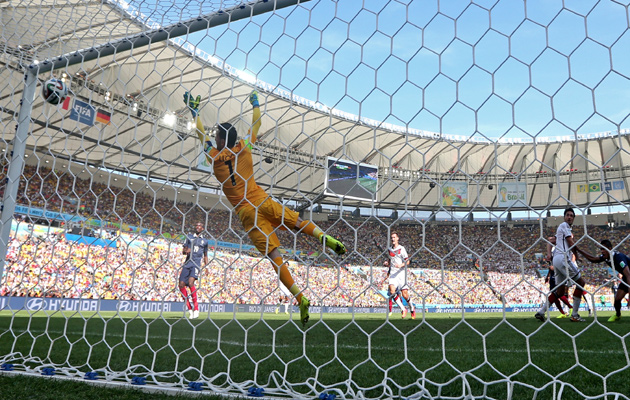 Germany are ahead! A long free-kick whipped in by Toni Kroos. Mats Hummels rises above Raphael Varane to head past Hugo Lloris. Germany’s first chance of the game, after Benzema had a great chance to put France ahead minutes earlier.

There have been plenty of team changes for today’s first quarter-final.

For France, Didier Deschamps has defender Mamadou Sakho fit again, and that means Arsenal’s Laurent Koscielny loses his place in the starting line-up.

Olivier Giroud also starts on the bench after his partnership with Karim Benzema failed to gel against Nigeria. Antoine Griezmann comes in for the Arsenal man.

For Germany, Joachim Low has opted for a back-to-basics line-up with Philipp Lahm moving back to full-back and Miroslav Klose, the World Cup’s all-time joint leading scorer, starting in place of Mario Gotze. Per Mertesacker, after a shaky performance against Algeria is dropped, and in come Mats Hummels and Sami Khedira.

You can read our full preview of this game here.

An intriguing encounter awaits in Fortaleza tonight as hosts Brazil face Colombia. You can read our preview of this eagerly awaited encounter.

Team of the second round

Our friends at whoscored.com have been doing sterling work monitoring the performances at Brazil 2014. Their latest effort brings together all the data from the Last 16 games to produce a team of the round.

Statistically, this is the best XI of the second round. 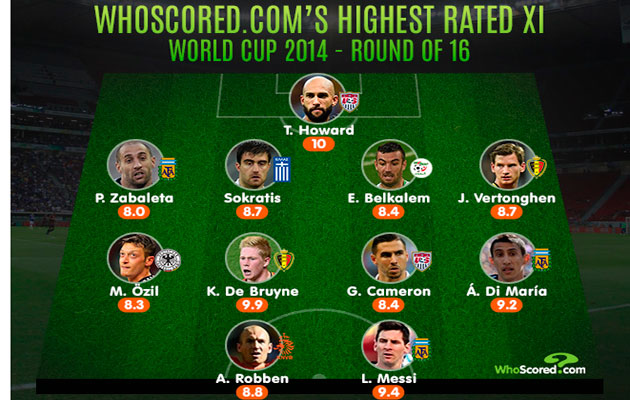 Germany coach Joachim Low has been speaking about the ball-playing skills of goalkeeper Manuel Neuer. With several players recovering from flu symptoms, Low remains confident of overcoming France to reach the semi-finals.

On the eve of the biggest match in the country’s history, the excitement is beginning to build back home in Colombia.

FIFA has been talking the talk on the issue of racism for a number of years now, but, as this report from Keir Radgendge demonstrates, there is still a long way to go before their actions speak as loudly as their words.

After a two-day hiatus, the World Cup returns with a pair of mouth watering quarter-final ties.

First up, France face Germany in a match steeped in World Cup history, while later today, hosts Brazil meet Colombia, one of the surprise packages of this incredible tournament.