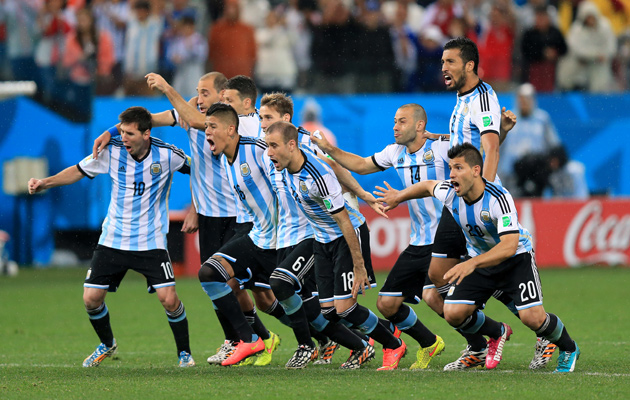 Argentina have won the penalty shoot-out 4-2 and will face Germany in Sunday’s final. Ron Vlaar and Wesley Sneijder missed penalties for Holland, leaving Sergio Aguero to convert the winning spot-kick.

A cruel end for Holland, perhaps, but over the course of 120 minutes they did little to deserve reaching the Final.

After 90 minutes in which Holland failed to have a single shot on target, we’re heading into extra time.

Palacio and Aguero on for Argentina

Perez and Higuain off as Sabella responds to Holland’s changes.

Clasie on for De Jong

Jordy Clasie is on in place of Nigel De Jong, who didn’t last past the hour. With Daryl Janmaat on at half-time for Bruno Martins Indi, Louis Van Gaal has made early changes, with Alejandro Sabella yet to respond. 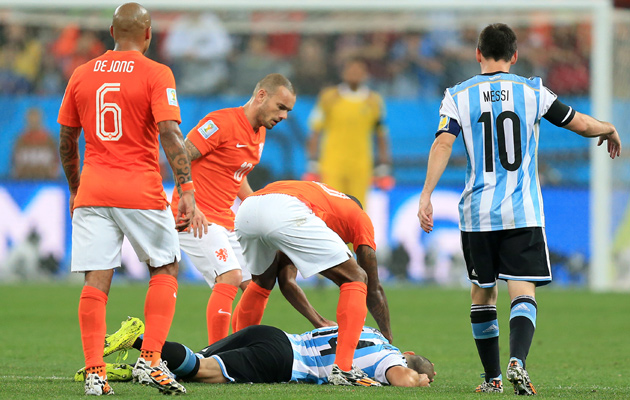 Argentina’s Javier Mascherano (floor) after a clash of heads

A tight 45 minutes, with neither side giving much away in midfield. Enzo Perez has been lively on the right for Argentina, linking well with Pablo Zabaleta. Main talking point has been the concussion suffered by Javier Mascherano. The Argentina midfielder insisted on carrying on playing after suffering a nasty knock on the head.

A cagey start in damp conditions in Sao Paulo. Holland are getting a lot of players behind the ball, trying to stop Argentina playing on the break, but Argentina are finding some joy down the right flank. Enzo Perez’s run was ended by a Ron Vlaar foul and from the resulting free-kick, Lionel Messi had the first shot on target, but his effort was held by Jasper Cillessen.

Nigel De Jong returns to the Holland starting line-up for the semi-final against Argentina, while Robin Van Persie starts, despite hints from the Dutch camp that he might not be fit.

For Argentina, Enzo Perez comes into midfield in place of the injured Angel Di Maria. Marcos Rojo returns at left-back.

It’s been interesting reading the player ratings for last night’s match. L’Equipe gave Fred a virtually unprecedented score of 1, while the likes of David Luiz and Marcelo were each awarded a paltry 3. Presumably, the writer missed that 20 minute spell in the first half when both players went AWOL and Brazil conceded 5 goals.

It was in Brazil, though, that the knives really came out. O Globo described Fred’s as described as ‘tragico’ – an overused term within a sporting context, but on this occasion one that does not seem unduly hyperbolic.

As for the Brazil players, well each and everyone one of them was given a well deserved 0.

Brazil reacts to the humiliation

As the second semi final between Argentina and Holland draws closer, what better time to look back at one of the all-time great World Cup goals. It came when these sides met at the quarter-final stage of France 1998.

Brazil reacts to the humiliation

Brazil truly is a nation in shock today, and judging by the covers of the country’s newspapers, a lengthy period of reflection and indeed self loathing looks to be on the cards.

Here’s our in-depth preview of tonight’s game, which pits two of the stars of Brazil 2014 against each other.

Lionel Messi has enjoyed an outstanding tournament so far, scoring in each of Argentina’s first four games at this World Cup, while Holland’s Arjen Robben has been in scintillating form throughout the tournament.

People have been busy overnight compiling their amusing Brazil-Germany video clips and animated gifs. One of the funniest we have seen plays an Alan Partridge commentary over footage of the 7 (seven) Germany goals.

While world continues to digest the astonishing events that took place in Belo Horizonte, we have another semi-final to look forward to tonight. And, like Tuesday’s remarkable encounter between Brazil and Germany, this one, on paper, looks like a fairly even contest.

Holland, losing finalists four years ago, face Argentina in Sao Paulo. Both teams have had their moments at Brazil 2014, but neither has been entirely convincing. But, 24 hours ago, we were saying the same about Joachim Low’s Germany, and we know how that turned out.