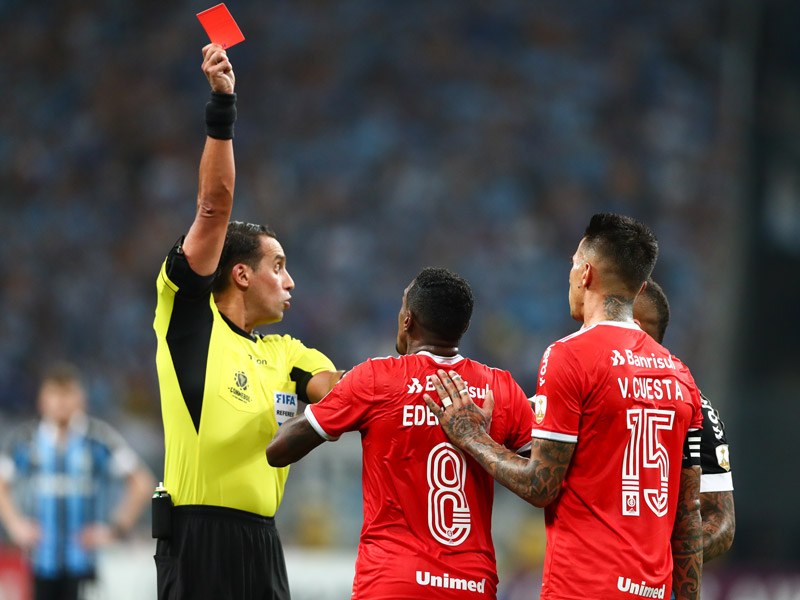 The Libertadores went out with a bang. In the last game before the Coronavirus outbreak forced a suspension, eight were sent off in the Porto Alegre derby between Gremio and Internacional. Brazil’s fiercest derby, taking place for the first time in the Libertadores, boiled over into 15 minutes of madness towards the end of game, when a free for all broke out and kept finding new momentum. The referee may have even thought of abandoning the game, but kept his cool, took his notes and ended up sending off three players and a substitute from either side.

Eight men out, though, is nowhere near a Libertadores record. Back in 1971 when Boca Juniors of Argentina hosted Peru’s Sporting Cristal, nineteen were ordered off after a brawl worthy of a John Wayne Western – and the players spent the night in the cells.

It was a crunch group game where the flare up point came in the 89th minute, with the score at 2-2.

And looking back almost 50 years later it is the scoreline, as much as the on pitch violence, that catches the eye.  Peru had just managed to stop Argentina going to the 1970 World Cup. Cristal had already beaten Boca 2-0 in Lima – and they were not even the strongest Peruvian side in the group, which was topped by their local rivals Universitario, who the following year went all the way to the final.

Last week the reigning Peruvian champions Binacional went to Buenos Aires to take on River Plate. The game was played behind closed doors – not a consequence of corona virus, but because River are suffering a punishment for fan misbehavior. Without anyone to cheer them on, River won 8-0, missing two penalties along the way. It could have been 25. Binacional looked like a park team.

This lack of competition looks like becoming a problem for the Libertadores, whenever the action does resume. Not since 2013 has a Peruvian club managed to make it through to the last sixteen. Chile has only had one qualifier in the same period, Venezuela only one since 2009.

Even Colombia, which should be so much stronger, appears to have collapsed. It has produced just one qualifier in the last three years, and has got off to a dreadful start in 2020, its three teams registering one victory and five defeats.

There are valiant exceptions. The Paraguayans can usually be relied up to punch above their weight, and their representatives have got off to a good start this year. Ecuador, too, has some interesting sides. Little Independiente del Valle are a splendid side who have put together two excellent victories. On the other hand, it was dispiriting to see the ease with which Barcelona of Guayaquil were swatted away by reigning champions Flamengo last Wednesday night in the Maracana. The Ecuadorians saw off a number of Brazilian opponents on their way to the 2017 semi final.  But they barely got out of their own half on the way to a 3-0 defeat.

Barcelona have twice reached the final, in 1990 and 98. But times were different. Back then, clubs from the same country eliminated each other. And then the Brazilians and Argentines met in the semi final, ensuring there was a place in the decider for a team from one of the lesser nations.

Now there are no such restrictions, and Brazil and Argentina count on more clubs than the other countries. Club football in South America is functioning ever more as an export industry. The USA has emerged as an extra destination. Brazil is buying in from neighbouring nations as never before.

And so there is little left to brawl about when teams from Peru meet opponents from Argentina. And the business end of the Libertadores, when the action resumes, runs the risk of turning in to a glorified Brazilian Championship with Boca Juniors and River Plate thrown in.