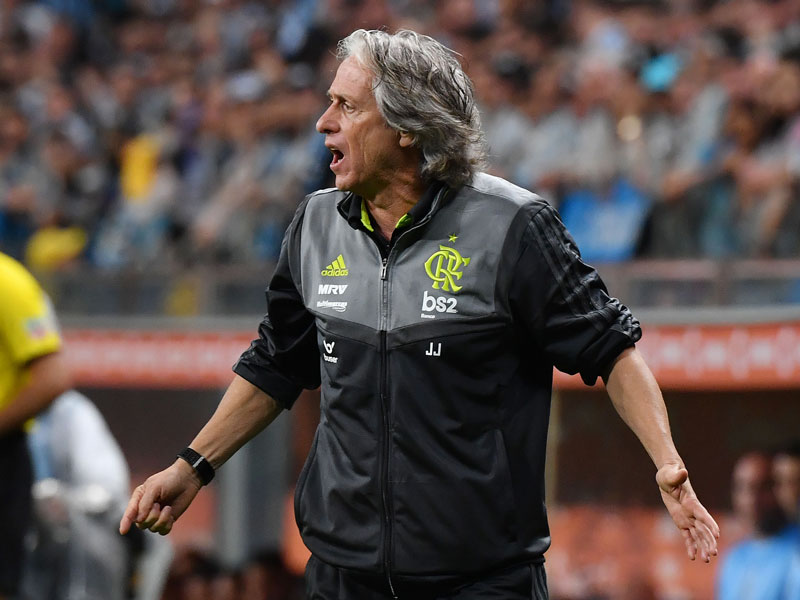 Gremio coach Renato Portaluppi was a relieved man after the first leg of their Copa Libertadores semi final. At home to fellow Brazilians Flamengo, Gremio had ridden their luck and struck late to salvage a 1-1 draw – in a game in which for long periods his side had been overwhelmed.

“In the first half Gremio didn’t even see the ball,” said Renato after the game.  His side have a possession –based model of play, consolidated over a long period.  This is their third consecutive Libertadores semi final  – and Flamengo had more than two thirds of possession in the first half, and plenty in the second. And this was not sterile possession, in zones where they were not creating danger to the home defence. They strangled Gremio in their own half of the field – and had three goals disallowed, two of them to very narrow offside decisions.

This is the new Flamengo, giving captivating masterclasses on a weekly basis since Portuguese coach Jorge Jesus took over in the middle of the year. And what a difference he has made!

Over recent times most Brazilian clubs, even the big ones, have employed an essentially reactive model – defend deep to create space for the counter attack, and charge forward sporadically on the error of the opponent. It all looked very barren a year ago, when Brazilian team after Brazilian team crashed out as a consequence of crossing the line between pragmatism and excessive caution.

Jorge Jesus has stormed the castle, sending his team out to impose themselves on the game. There is a marvellous fluidity about the front four – strikers Bruno Henrique and Gabriel plus attacking midfielders Everton Ribeiro and the Uruguayan Giorgian De Arrascaeta (who picked up a worrying injury against Gremio and will be absent for a while). The two full backs, Rafinha and Filipe Luis construct from deep and make their presence felt in the final third, and there is plenty of attacking participation from the two central midfielders, Gerson and Willian Arao. From open play, eight players are capable of hurting the opposition – and, for extended periods, of smothering the opponent’s counter attack at source.

With his team at the top of the league table, and favourites to make it through to the final of the Libertadores, the Jorge Jesus revolution is inevitably being carefully watched up and down the country. The key questions are these; how much will this model be imitated? What will be wider consequences on Brazilian football?

There are two reasons for caution.

One is that Flamengo have the resources to assemble a squad of both quality and depth – though this latter may now be tested as a result of absences through injuries and international call ups. Very few clubs can compete with Flamengo’s financial muscle.

The other is the lack of a vital component in such a model of play – centre backs with the speed and capacity to operate in a high defensive line. One of the most important members of the Flamengo side is Pablo Mari, a Spanish centre back who was on the books of Manchester City, who was signed in the middle of the year and has slotted straight into the team. Take Mari out of the picture, and the team would be much more vulnerable. In all probability, the fluidity of the front four would not be possible, because with a deeper defensive line a gaping hole would open up in midfield.

It is significant that Flamengo had to import this player from Europe.  Brazilian football no longer specialises in producing this type of centre back. The likes of national team pair Marquinhos and Thiago Silva are exceptions. Eder Militao, seen as a long term hope at centre back, came through in Brazil playing much of his football at full back. The majority of local centre backs are big figures, proficient in the air in both penalty areas, but too slow to play in a high line.

This is not a coincidence. The Brazilian centre backs have been developed with the local model of play in mind. And in a scenario of insecurity, dominated by the fear that the coach might lose his job, the easiest path is to defend deep, head the ball away and hope to win on a counter attack or a set piece. The first time that the World Cup was won with a back four, Brazil had at the heart of the defence the hulking Bellini to deal with the aerial threat alongside the quicker and classier Orlando Pecanha. Recent Brazil youth sides have tended to pair one player of the Bellini type with another.

Those seeking to imitate the work of Jorge Jesus, then, may run into difficulties. And it is a problem that could take time to fix, because the solution passes through a change of methodology in the formation of defenders.