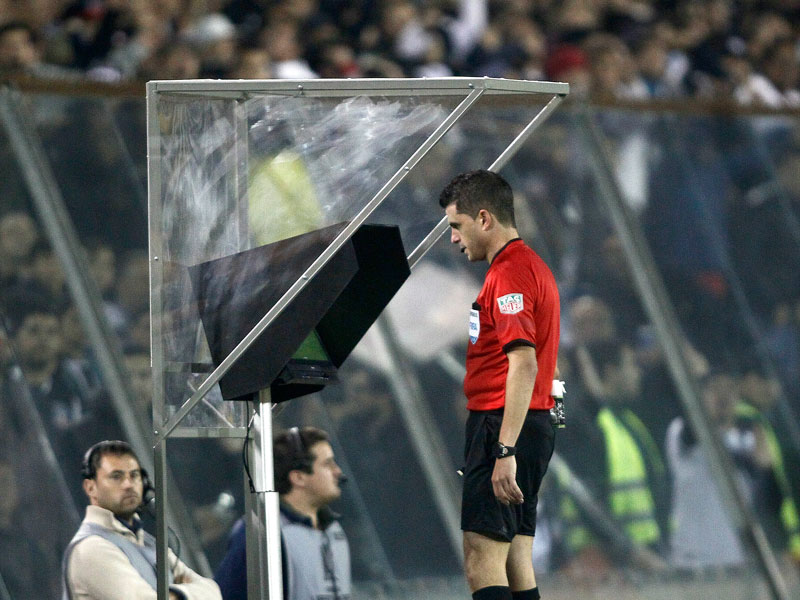 Just as last year, VAR was introduced to South America’s Copa Libertadores at the quarter final stage – and the evidence of last week’s first legs shows that the video recourse is still in its infancy.

Indeed, the controversy engendered by the use of VAR in the Boca Juniors v Cruzeiro game sheds light on an aspect of VAR which is easy to overlook. Amid all the talk of the technology involved, perhaps insufficient attention has been given to the human element – to how the new situation can have an effect on those who use the technology.

The four first leg ties were played over the course of the three night – and every night there was a VAR-induced sending off.

Tuesday’s red card was relatively non-controversial, and indeed might be used as an advert for the video resource.  Playing against reigning champions Gremio of Brazil, Gervasio Nunez of Argentina’s Atletico Tucuman helped ruin the biggest night in his club’s history. After barging Alisson to the ground to stop a counter attack, Nunez clearly stamped on his prone opponent. He would have got away with it in the previous round.  But with VAR  in operation, the offence was spotted and the appropriate punishment handed out.

Thursday’s sending off may have been a little less clear cut, but still seemed a reasonable decision. Right at the end of the game between Colo Colo of Chile and Palmeiras of Brazil, Colo Colo’s left wing back Damian Perez launched into a bad tackle on Lucas Lima – and followed through with his studs up. The touch of malice was almost certainly the result of frustration – Palmeiras were winning 2-0 – and the referee could possibly have let it go with a yellow. The red card, though, was not entirely out of order.

Wednesday’s decision, though, would seem to fall into a different category. Up for a Cruzeiro corner, giant centre back Dede launched himself at the ball in an apparent attempt to win the header. Boca keeper Esteban Andrada got there fractionally ahead and punched the ball out, just before Dede’s head collided with him. Andrada was a bloody mess. It later emerged that he had broken his jaw, and will be out of action for some time. The incident, though, came across as one of those unfortunate clash of heads that are such a worrying part of the game. No one on the field was quite sure what was going on when the VAR official brought attention to a possible red card offence.  Paraguayan referee Eber Aquino went to the side of the pitch to have a repeated view of the images, and caused widespread surprise when he sent Dede off.

By general consensus this was an absurd decision – taken not in the heat of the moment but with time and apparent serenity. So how is the outcome so unsatisfactory?

Perhaps the recent account of a Brazilian referee might be useful.  Sandro Meira Ricci retired after the World Cup, leaving him free to discuss his experiences.  In Russia he took charge of games on the field, and also served as the VAR official – a task he found extremely difficult.

“We trained exhaustively for two years. But in a game situation, it’s a different story. Every time something happens where there is a possibility of changing the decision, the silence in the VAR room is interrupted by hysteria.  Even sitting down, the heart rate goes from 60 to over 100.  The pressure to give an answer can weigh heavier than the need to be precise. The button to inform the ref that he should have a look, which looks gigantic before the game, practically disappears in the middle of the screens.”

Ricci was the VAR official for the England v Tunisia game, and confesses that he should have alerted the ref to the holding going on at England corners. But he found himself looking for ways to defend the referee, bending over backwards not to over-rule or add to the decisions being taken on the field.

It is possible that the situation in the Boca-Cruzeiro match is the exact opposite of that described by Sandro Meira Ricci, but with the same mechanism at work.

In this case, the VAR official was another Paraguayan, Mario Diaz de Vivar. Based on the fact that Vivar drew attention to the incident, it would seem fair to assume that he was pushing for the red card. Eber Aquino may also have been concerned at Andrada’s bloodied state, and thus willing to conclude that unreasonable force had been used.  But without Diaz de Vivar pushing the button, the game would have proceeded.

This brings us to the human reality at the heart of the matter. Referees are not used to disagreeing. The strength of their position is based on their sovereignty on the field.  The possibility of different interpretations always exists. This, though, is the first time it has existed among working referees of similar status.