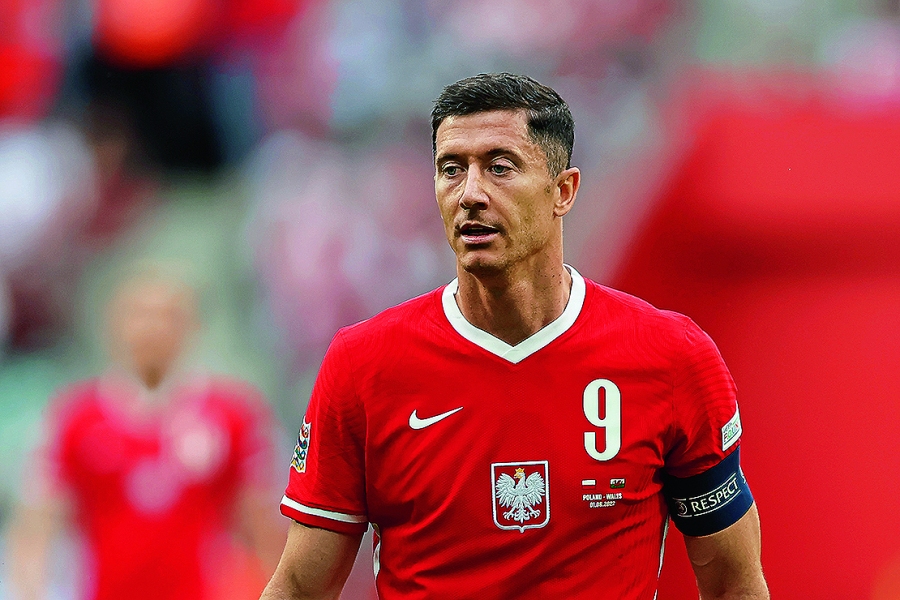 The Word Cup is around the corner – is this international break a good thing or a bad thing?

I don’t know. For sure, it’s something new for everyone. Having the World Cup during the season is a huge challenge. For me personally, I feel ready for it. For teams, it’s also tough because they hardly have any time to prepare for the tournament. This is part of the challenge: you have to be ready and perform at your best despite what’s going on.

What kind of football will we see at the world Cup – more physical? More technical?

I think it will be a physical tournament, for sure. Given the timing of the World Cup, the players already have a rhythm because they have already been playing. I think teams will play with more risk, because the distance between the first and the last game of the group is very small – it’s a week or ten days.

How do you evaluate Poland in this World Cup?

It’s a huge challenge and it’s a very tough group – each game will be difficult. In the World Cup, it’s important to know how you’re going to play. For everyone playing in Qatar at this part if the season, it’s a huge challenge. We have to be ready for this, we have to fight from the first minute and it doesn’t matter how hard it’s going to be, we have to show our best.

Are you hoping to win the Golden Ball award?

My role on the pitch with Poland is very different to that of Barcelona. I have to play for the team to win for the team. For me it will be a huge challenge to win it because we don’t attack a lot and we don’t have loads of chances to score goals so for the striker it’s not the easiest. But, I’m ready for this and everything I do will be for the team, not for my personal statistics. It will be tough. It depends on the team – if the team follow you, it’s easier to achieve something special.

You play Argentina is the group. Do you think they’re one of the favourites?

Yeah, I think Argentina with Messi are one of the favourites to win the World Cup. They haven’t lost in 30+ games; they play well and you can see they are a really good team. They have a plan, which they are following as a group.

It’s been said that football owes Messi the World Cup. Do you agree?

If look at football for the past ten to 15 years, the two main figures have been Messi and Cristiano Ronaldo and, in the end, if you think about who deserves to win this World Cup, these two names always pop up. They are legends. But on the flip side, this is football and you can never say what is going to happen because it’s a dramatic and unpredictable game. But in Messi’s case, it’s impossible for his achievements to be replicated as his amazing story continues. Now he’s dreaming to win the World Cup. For him, that’s the big challenge. He wants to now win the World Cup with Argentina, but this is a World Cup and you can never know what is going to happen.

What do you think about the Spanish national team?

I think that even though they have a lot of young players; they are still one of the favourites to win the World Cup. They could reach the semi-final or the final. For two years they’ve been playing well and they have the potential, but as always this is the World Cup and you need something more. You need luck, you need to be in the right position in the right moment, especially given this year teams don’t have time to prepare the first game – they have just one week and not three or four like in previous World Cups.

You played against Spain a year ago. Do you think the team has grown over the past year?

They have grown up. Game by game they have got better, even since the European Championships they’ve improved. Since then, they qualified to the World Cup, they have shown they can play not only beautiful football, but also effective football. With all this potential, they can prove themselves by winning the World Cup.

You play every day with young players like Pedri and Gavi. Do you think they can be the surprise of the tournament?

I think it’s their time. I think they are going to take a huge step forward not only at the World Cup but also this season. For young players, their first big tournament not only gives them experience, but it also gives them a kind of new feeling, a new power and new self-confidence. For these young players, the World Cup will help them progress with their performances and Pedri and Gavi will take this next step.

You worked under Hansi Flick at Bayern Munich. What do you think he can achieve with Germany at the World Cup?

I know that Hansi Flick is an amazing coach and with him they can achieve a lot at the World Cup. It also depends on the injuries you have before the first game. Lots of players have already got injured and during the World Cup you play a game every three days, so often it’s difficult to stay fit. But Germany have a great coach and a good mix of old and young players. They’ve been in good form recently and they definitely could reach the semi-final and once you reach the semi-final, you never know what could happen. I know they will be very dangerous.