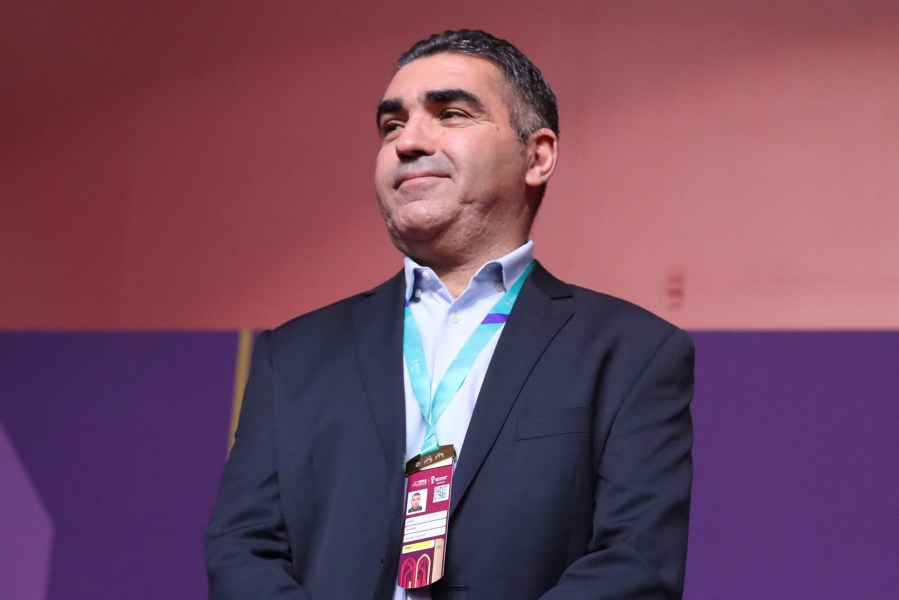 How did you rebuild the team after the Africa Cup of Nations, a disappointing tournament for Tunisia?

The fact that I was a part of the backroom staff of coach Mondher Kebaier helped me as I knew the whole team. We didn’t lose a lot of time rebuilding the team. I knew all the details, both tactically and technically as well as mentally. It helped me to get better results and better performances.

Tunisia defeated Chile 2-0 and Japan 3-0 at the Kirin Cup. Which lessons did you draw from those victories?

It was an important enough tournament. For us, it was significant after having qualified for the World Cup against Mali. After two matches in qualifying for the 2023 Africa Cup of Nations against Equatorial Guinea and Botswana, away, we had four points. It was key for the group to have a clear idea of where we wanted to go, five months before the kick-off of the World Cup, our main goal. The Kirin Cup is enough of an interesting competition. We tried to give players with little playing time maximum opportunities. We managed to keep the group stable in the sense that we didn’t make a lot of changes. The Kirin Cup gave us a lot of information about the depth of our team.

Mali almost prevented you from qualifying…

Yes, they are formidable, high-quality opponents, of a big calibre. Mali have considerable physical and technical force. We played against Mali in the knockout stages of the Africa Cup of Nations in Cameroon and played a friendly against them. Our knowledge and respect for the Malians allowed us to navigate the two matches well. The experience and desire I saw in the eyes of our players as well as our preparation paved the way for meeting the challenge and reaching our objective.

The friendly international against Brazil in September was the biggest test before the World Cup.

Yes, you don’t play Brazil every day. It is the football country, loved and respected by everyone. It was not simple to play an adversary of that calibre, but we tried to get the most out of it. We are in the group with France, Denmark and obviously Australia. France are title contenders, Brazil the same. They have the same quality, technically and tactically. They are of course not entirely the same, but it was about the quality of the players and the team. Those two teams together with Argentina, for me, can win the World Cup. They are the best teams at the moment, Brazil with the form they have. It was a match of a very high level for us and an excellent test.

In general, what do you think of Group D?

It is a complicated group. France are the seeded team, the title holder with experience and maturity and one of the main favourites for the title. Denmark played the semi-finals of the last European championship and are a top-ten country, which tells you everything about their form and pedigree. Australia play in the Asian zone, but they have a European mindset.

Tunisia have never survived the group stages. Will it be any different in Qatar?

That is the main goal. It’s Tunisia’s sixth participation. We have never made it out of the first round, but that will be our aim. We will try everything and focus on that goal.

Do you see that your players believe Tunisia can be competitive?

Yes, of course. We have experienced players, who have formed the core of the team for four, five years, and young players. We understand the size of the challenge and have great confidence in our national team and the work of the staff – the technical, medical staff as well as the administration – which we have put in place. Above all, we believe in our players. We know that it’s not going to be easy. It will be complicated. We respect our opponents but have as much chance as other countries. We have great belief in our team.

It is the strategy of the federation. The fact that he has participated at the age of 19 in the Arab Cup in Qatar, and the Africa Cup of Nations in Cameroon and now the World Cup, that is not straightforward. That can form his character and personality. That will give him the opportunity to become a core player in the next four or five years in the national team. We are all delighted to have such a promising player among us.

Why do you think that so few Tunisian players are plying their trade in European leagues?

It is a problem that requires analysis. So we have to question the youth development at the level of the Tunisian league and clubs. You can’t compare the Tunisian diaspora with the Algerian or Moroccan. We don’t have that kind of potential and that is why we don’t have that number of players in Europe.

The five African nations will all have African coaches at the World Cup for the first time.

It is an important point. It’s something that should get the spotlight, the fact that the five African countries have had the courage to confide in the coaches of their countries. It illustrates confidence. It is a task to have the honour to represent our country in the World Cup finals and it is a moral engagement above all. Hopefully, all the coaches are lucky and make the decisions that prove their federations right in having chosen them.

Which African team will be the strongest at the World Cup?

It depends. Personally, I have great confidence in my team as well as in Morocco. Senegal is the highest-ranked team in the FIFA ranking in the last two or three years. Cameroon remains an experienced team. Everyone has their chance. I hope that all these countries will stand firm in the World Cup.

Do you feel more pressure as a local coach?

No, it is a normal aspect of our work – to live with pressure. It’s also part of football’s charm. So, we try to be very professional and focused but you have to live with that pressure and try to give it your all.

It will be your first World Cup as a coach. That’s a challenge as well.

Of course, every coach has his experience. Participating in such a competition with your country gives you a sense that it’s a challenge. It is a dream for every coach, but you have to remain focused and professional. It is a challenge for the entire nation, not just for an individual. Today, we have the chance to get to a 100% to represent our country. So let’s hope that mentally and from a confidence point of view, we will be 100%.

You will have very little time to prepare, which complicates the buildup.

It is an abnormal tournament. We all know that for the first time the World Cup will be staged in the middle of the season, in November and December. In the past, all finalists had the chance to prepare for three weeks to a month. That allows the coach to prepare a programme that is robust enough. Now, it is for us to adapt to this situation. We will have just one week to prepare but that will be the same for all participating nations.

It will be the first World Cup in the Arab world. What does that mean to you?

It is an honour, the fact that an Arab country will host this prestigious competition. We had the chance to participate in the Arab Cup. It was exceptional. It is an honour for all of us Arabs to have one nation that had the courage and the possibility to organise such a tournament. I am sure that it will be one of the best World Cups ever.