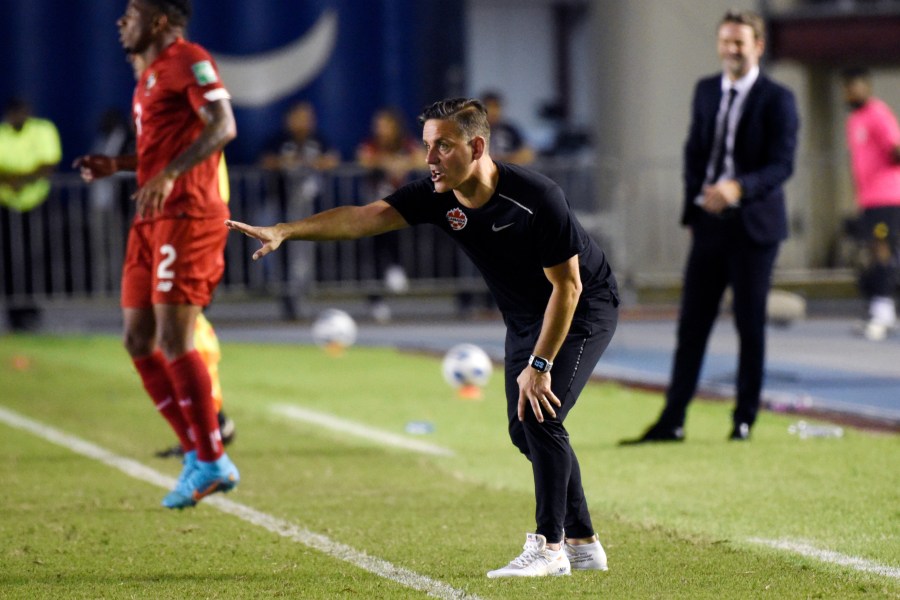 Canada return to the World Cup for the first time since 1986. How would you explain football development in Canada over the last decade?

It’s difficult for me to talk about as I was on the women’s side of the program. That’s where I started my career in Canada. I came into a program that had just finished last place in the Women’s World Cup. So moving through almost seven years with the women’s team, the opportunity to work with the men’s team was presented. At that stage, I think their mentality was to try and build a similar development system that we put in place on the women’s side to prepare the country for the home World Cup in 2026.

There was an important step to try and connect elements of our high-performance pathway with our provincial and regional pathways. On the men’s side, it was about trying to integrate our youth programs with the MLS clubs. That’s where we’ve put attention on the youth and development perspective in the last sort of seven to ten years.

Canadian football is quite structured at the grassroots level. Does the national team play a unique brand of football?

We’ve worked hard on the women’s and men’s sides. I was the program director for both men and women at the time as part of my mandate. On the women’s side, it was programmed from around the age of 13 to the senior team, so being able to implement a national playing model, a style of play and identity. When I moved on to the men’s team, I brought a lot of staff with me, from technical staff to sports science staff. Again, part of the mandate was to build an approach, a style, a tactical framework, and a cultural framework, from U14 through to the men’s national team. The first few years in the role were spent working at the provincial level, the professional youth level, MLS levels in Canada to inspire a tactical vision to give opportunities and clarity to young Canadian players coming through our system, particularly those with dual passports.

I knew we were going to have to rely on young players, given the profile of the national team when I took over, so it was to give those young players an opportunity to expedite their chances when they came into the environment – that they weren’t getting stuck on technical terminology or some of the cultural aspects around our high-performance system. A lot of our work at the youth level was geared up to try and ensure that young players could transition very quickly and therefore have an impact on the field, and so as not to waste camps, which are few and far between at the international level, to try to and get up to speed with tactical models or how a culture operates. A lot of work was put into that to smoothen that transition across all of our teams from U15 to the national team.

You have a background in women’s football, does that give you a unique profile?

I think it does. Working on the women’s side, you hone and develop different skills: from communication to how you bring female teams together. The difference between coaching men and women is not major, but subtle. One of the skills that I’ve developed on that journey as a women’s national team coach is probably the fact that I got so much experience in global events – World Cups, Olympic Games – we’ve been to a lot of youth and senior national tournaments. There are not that many managers who get that amount of experience. The staff and I transitioned into the men’s team and we’ve been able to bring a lot of that experience. But again, some of the skills that are very different on the women’s side, we’ve been able to transfer a lot of those processes and systems into the men’s side and to build a pretty tight team spirit.

Were you surprised at how dominant your team sometimes was during the final round of qualifying?

A key word in our identity was that we did not want to be a passive Canadian team in qualifying. The players and the leadership group worked very hard behind the scenes to be very clear on what they wanted to achieve and, more importantly, what they wanted to pioneer. Pioneering is a really important word for this Canadian men’s team because we felt there was so much that we could achieve that was new, whether that was some of the results on the road or getting a nine-point window, which we achieved in January to targeting finishing top of CONCACAF and, you know, even set a goal of being an unbeaten team. They came very close, 17 games unbeaten in the qualification journey. It was about having goals: one, that we could show how connected this team was and two that this was a new candidate. We would be different in our style of play and how we ensure that our opponents always felt they were facing a Canadian team that will be on the front foot.

You mentioned Alfonso Davies and his front-foot football at Bayern Munich. His obvious qualities aside, do you think that’s one of the important things that he brings to this Canadian team?

I think his individuality is perspective on playing the game as well as his experience at the championship level. He’s the only player in and around my squad that’s even got past the Champions League quarter-final. We don’t have those tier-one players, we have a dearth of those players playing at that quality. Alfonso is going to provide that next-level quality, and more importantly, his identity, just being in our team opens up opportunities for other players on the field as he’s targeted, so time and space can appear for players who need it.

What is your overall assessment of your group with Belgium, Croatia and Morocco?

Belgium, Croatia, they are top-five level in the world with the players that they have. Belgium have never been beaten by an underdog in the past six years. You know that that is a monumental task, but it is an underdog story for us in those games. It’s just real excitement and an opportunity to go out and be brave, courageous and test ourselves, and take a step forward for Canada in building respect and credibility as a football nation. No different for Croatia. Our scouting and analysis of that team. You watch them beat France recently and you see the competence of their midfield three. Yes, it’s a sobering process when you get into deep scouting looking at these teams. For Canada, the reality is that we don’t have a great amount of expectation from the world on this team. We have our own expectations and we have got good internal motivators. We’re not clouded by the external motivations or the external noise that surrounds our opponents. We know what we are strong at, and we are starting to build a clearer understanding of areas we can bridge the gap on this level of opponent. We can go in with a degree of confidence that we can close the gap. Anyone can beat anyone in tournament football on a given day, so that’s the spirit we will be playing with.

In the qualifiers, Canada played such intense matches. How do you maintain that intensity?

When you get to the Qatar environment, you will feel the intensity. I have been to World Cups before. A home World Cup in Canada you can’t predict until it hits you. The intensity and the razzmatazz around it, are something different so I don’t think you can really prepare the way for those tough qualifiers we went into. The context of the World Cup is different. We have been in preparation and the mood is light. It has taken a lot of pressure off the players, but when you land in Qatar everything changes. Everything changes. There will be a lot to contend with for this team – people like Kevin De Bruyne and the coaches of the other teams. We will have to dial into what is important.